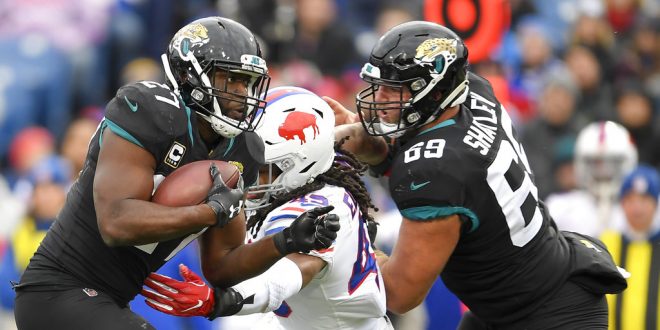 Tonight’s Thursday Night Football matchup features an AFC South rivalry as the Tennessee Titans host the Jacksonville Jaguars. The Jaguars haven’t had the season that most predicted. Instead, they sit last in the AFC South with a 4-8 record. However, tonight could be a bright spot in their season as they look to play spoiler in Nashville.

The Titans have won the past three matchups and five of the last six between the two AFC South teams. The Jaguars haven’t beaten the Titans since December of 2016. While the Jaguars’ playoff hopes are surely over, the match still serves as an opportunity for them to end the three-game losing streak to the Titans.

The Jaguars can also play spoiler to the Titans who currently sit at 6-6 and in playoff contention. A win tonight wouldn’t mean much for the Jags on paper, but a chance to hinder their division rivals’ chance at the playoffs is something they sure would savor.

When he’s played this season, Fournette has been a key piece in the Jags offense. They almost completely rely on him and the running game this season. However, Fournette hasn’t been as productive as he was last year and is averaging 3.5 yards per carry. Their dependence on Fournette makes their offense conservative and predictable. However, considering the struggles the rest of their offense this season, running the ball through Fournette is still the best option against the Titans tonight.

The past two meetings between the Jaguars and the Titans were low scoring affairs, including a 9-6 win for the Titans earlier this season. Neither team boasts an explosive offense, but the Jaguars especially have struggled this season. If they hope to upset the Titans, they’ll have to rely largely on defense and controlling the clock through their running game.

Last weekend, quarterback Blake Bortles was relegated to the bench and Cody Kessler was named the new starting QB. The offense under Kessler isn’t much more threatening than it was with Bortles at the helm but he moves the ball efficiently. However, Kessler is averaging only 5.7 yards per attempt. So if the Jaguars want to avoid being swept by the Titans again this year, they will most likely need to rely on Fournette and the running game to control the clock and keep Marcus Mariota and the Titans’ offense off the field.

The Thursday Night Football match between the Jacksonville Jaguars and the Tennessee Titans will take place at Nissan Stadium in Nashville. Kick-off is set for 8:20 PM and you can catch it on FOX.