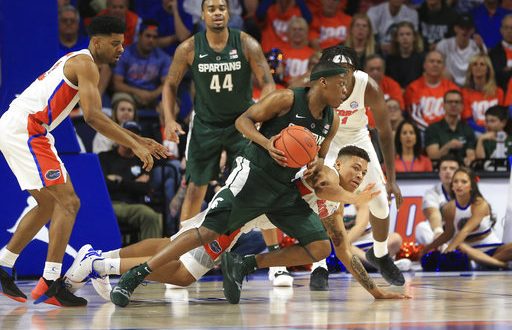 The Florida Gator men’s basketball team dropped to 5-4 on the season after Saturday’s 63-59 loss to the #10 overall Michigan State Spartans.

Brothers until the end.

Thoughts From the Loss

It’s no secret that the Gators have struggled to score the ball consistently this season. Coming into this game, the team ranked 254th in the nation in points per game, 182nd in field goal percentage and 305th in free throw percentage. Lack of ball movement and poor shot selection have been recurring issues all season. While the offense looked better in the second half, the team struggled to produce points. They shot just 36.5% from the field, went 7-12 from the free throw line, and hit 6 of their 24 attempts from beyond the arc. Head Coach Mike White had some comments about the Gators’ offense after the game:

The offense is a huge area of concern for the team and for Coach White. He wants his scorers to play more confidently and with more focus going forward.

Spartan Big Men too Much

Michigan State showed a dominant presence in the paint behind junior Nick Ward and sophomore Xavier Tillman. The Spartan duo proved to be too much for Florida to handle. Ward finished with 13 points on 6-8 shooting to go with 5 rebounds. Tillman had 14 points. 9 rebounds and 3 steals in the win. On the interior, Mike White rotated Kevarrius Hayes, Dontay Bassett, and Isaiah Stokes to try and match up with the strong inside presence of Michigan State, but in the end, the Spartans got the better of Florida’s big men.

The Gator defense put on a very commendable performance in the loss. Despite their offensive struggles, it was the Florida defense that kept the team within striking distance the entire game. Defense turned into offense on many possessions.  The Gators forced 15 Michigan State turnovers and scored 15 points off those turnovers. They held the Spartans to just 4-15 from three. The Gators came up with 7 steals and three blocks. The effort and hustle the team showed was very impressive. Center Kevarrius Hayes said that the Gators energy and effort wasn’t the best in the first half, but in the second half his team turned it up.

Florida Couldn’t Get Over the Hump

The Gators remained in striking distance the entire game. Still, once the Spartans took the lead they never relinquished it. The second half saw the Gators repeatedly get within a couple of scores and fail to take the lead. After going down 39-27 early in the second half, Florida got within 4 points on seven different occasions in the second half, but they couldn’t get over the hump down the stretch. In the closing seconds of the game, Florida nearly forced Michigan State into a turnover that would’ve given the Gators the ball down by two points. Instead of that turnover, Michigan State’s Kyle Ahrens picked up the loose ball and dunked it with one second remaining on the shot clock to seal the game.

Kyle Ahrens beats the buzzer with a clutch slam as Michigan State ruins the Gators bid for an upset. pic.twitter.com/2ZdiJxgmGe