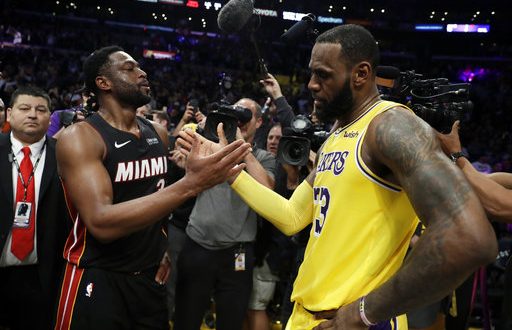 Wade vs James: The End of an Era

On Monday night the Los Angeles Lakers hosted the Miami Heat. The Lakers came out on top with a final score of 108-105. However, this game was much more than the

typical LeBron James vs Dwayne Wade match up. Monday, was the last time (extremely likely that it’s their last time), that those two would face each other on the court again.

“It’s bittersweet. Just knowing I’m losing a brother in this game. One that I’ve had many wars with, together and against each other. No better way than ending it in the Staples center. But this is my guy man, this is my guy” James said.

In 2003 two of the most notable basketball players in the world were drafted into the NBA. LeBron James, a 19 year old out of Akron, Ohio and Dwayne Wade a college junior entered the NBA draft. Both players were selected in the first round with James as the first overall pick to the Clevleand Cavaliers. While wade was selected fifth overall to the Miami Heat. These players journeys would travel throughout the country and the globe, apart and together.

James and Wade have faced off 30 times against each other in their 16 seasons in the NBA. Before Monday, they had a 15-15 record. The two had similar paths in the league. They stayed a while with the team who drafted them. Have been on Olympic Gold medal teams together, and have played for an NBA championship together when Lebron and Wade were both on the Heat and won the title in 2012 and 2013.

A unique, but typical ending

When Wade stepped onto the court in the Staples center he was honored on the video boards with a video compilation of his career saying “Thank you”. A unique feat to see especially since Wade was on the opposing team that night.

They even had a final pre-game workout together, just like old times in the 305.

The game, like James and Wade were pretty close. What more could an NBA fan ask for. A typical LeBron vs D. Wade night. The Heat were down by three and had 10 seconds left in the game. Wade went for a three, but of course it was guarded by King James himself.

Then, Miami’s Rodney McGruder grabbed the offensive rebound. He handed it to Justise Windslow and he went for the three which missed. James then got the rebound for the last few seconds preventing the Heat from trying again. As the last buzzer went off, Wade gave James a big hug and they laughed it off on the court.