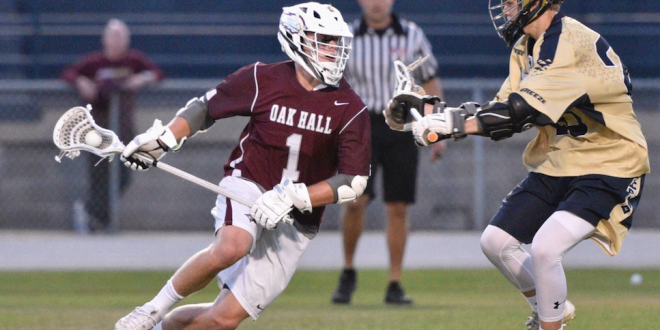 Football is king in Florida. That’s safe to say with 44 of ESPN’s class of 2019 top 300 football recruits residing in the sunshine state. Six more recruits than the state of Texas’, which is known as the high school football capital, 38 recruits.

With that said, lacrosse is up and coming in Florida and has potential to be the state’s next premier sport.

Lacrosse has been a high school sport in Florida since the 1970s. That said, it exploded on the scene with the arrival of Tom West.

West, the head coach of Ponte Vedra High School, played lacrosse at Renssealer Polytechnic Institute throughout the late 90s/early 2000s. West packed his things from Troy, New York and made his way to Palm Coast, Florida upon graduating. Here, he would go on to coach Flagler Palm Coast High School (FPC).

The city of Palm Coast built Matanzas High School and West took advantage of the opportunity presented to him.

West left FPC following the 2004-2005 season to coach at the new school and took some players with him. This move changed lacrosse in Florida for good.

West founded the Florida Possums club and Pumpkin Shootout Tournament while starting anew at Matanzas; Introduce the up-tempo style of 7-on-7 lacrosse to Florida.

Pace of play accelerates since goalies clear from their own net after each goal rather than the traditional face-off.

“(Pumpkin) helped me learn the X’s and O’s of lacrosse,” said Mike Hanrahan, a Matanzas High School lacrosse alum. “My dad grew up in Connecticut playing lacrosse and hockey so I’ve always liked lacrosse. I never really started playing until moving to Palm Coast and playing in Pumpkin that first year. Playing on that short field with no faceoffs was like playing basketball.”

West now runs four tournaments in Palm Coast every year 13 years later. Each are the biggest attraction in town.

North Central Florida is now becoming a part of the lacrosse hotbed conversation along with North and South Florida; Particularly Gainesville.

Lynn and Ian Millinoff started GLAX, a youth lacrosse program based in Gainesville, over a decade ago and their young players then have reaped the benefits today.

“In 2007, we started coaching at Buchholz,” Lynn Millinoff said. “Then it took us a year to figure out that you can’t start a high school team with kids who have never played before and be anywhere near successful. That started the feeder program, GLAX, the next year. We wouldn’t actually have been able to do it but we got a US Lacrosse grant, an equipment grant.”

With that grant, GLAX provided an opportunity for young grade school students to become athletes. Especially when other popular sports were not available.

“My daughter tried to try out for the volleyball team in middle school at Kanapaha,” Millinoff said. “There were over 300 girls there trying out for volleyball and the coach did not expect that kind of turn out at all. She basically stood up and addressed all of the kids and said ‘thank you all for coming out but if you haven’t played club volleyball, you’re excused.’ So just bringing another sport into the mix to us was really important and to have it grow so much and keep it going and keep all these kids active and doing something that they can call there own and make their identity is huge.”

Oak Hall High School has three players from last year’s roster playing Division 1 lacrosse. Seven other players are on Division 1, 2 and 3 rosters that started with GLAX. Most notably, twins Alex and Thad Spiker.

“You can tell when kids walk out on the field if they’re raised as outdoor kids,” Millinoff said. “Climbing trees, skipping rope, running and picking up whatever they can pick up; a bat, a ball, whatever. The Spiker kids were definitely those kids and it took them just a very, very short while to get used to a lacrosse stick. They were kids that were immediately standing out.”

The Spiker brothers, now freshman defensemen at Villanova University, led Oak Hall’s defense to a 16-3 record during the 2018 season with an average of 2.6 goals against and allowing less than five goals in just shy of 80% of their games including five shutouts.

“I think they started playing lacrosse in about in about sixth grade” said Ted Spiker, father of the twins and the Chair of the Journalism Department at the University of Florida.

“Then they tried out for the Generals program, which is one of the clubs in town, and the coach thought that they had some talent which is probably related to the fact that they got super into hockey on in-line skates. They would spend hours and hours and hours on the basketball court with their skates on and their friends and just play hockey. I think the stick eye coordination from hockey just translated to lacrosse so they seemed to have a little bit of skill when they picked up a lacrosse stick.”

Though the Millinoff family started the wave in Gainesville, Oak Hall coach Jonathan Montes brought the wave to the sand.

Montes, founder of SMS Elite Lacrosse in Maryland, came to Gainesville and founded the Florida General’s lacrosse club in 2012. Since then, Gainesville has become a lacrosse hotbed more than any other sport.

The Generals club fields U10-U14 teams and a high school team stacked with Gainesville and Ocala elementary, middle and high school students for tournaments around the state; very similar to Tom West’ Florida Possums and the results are identical.

Montes, also head coach of Oak Hall, and the Generals organization had 25 of their players make Gainesville Sun’s All-Area Lacrosse Teams while he won coach of the year in 2018.

“If you’re not starting early, the high school teams can’t compete,” Ted Spiker said as he expressed the correlation between club lacrosse and the spike of success in the Gainesville area. “I think all of those factor in; Millinoffs doing GLAX, that’s who the boys started with, then Montes coming in and building up club programs for all levels, all ages and that really elevated the game here in Gainesville.”