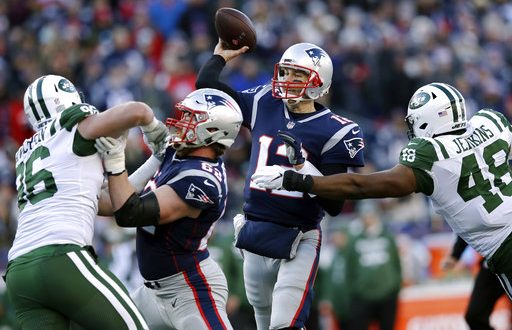 The New England Patriots are heading to the playoffs this weekend as they take on the Los Angeles Chargers. Patriots play-by-play announcer Bob Socci joined SportsScene with Steve Russell Wednesday to talk about Sunday’s matchup.

The Patriots will enter Sunday’s game coming off of a bye week. In their last game of the regular season, New England blew out the Jets, winning by a score of 38-3. Socci said the team went into that game with a playoff mentality.

He also spoke about the creativity the team has shown throughout the season. Dealing with injuries to Rob Gronkowski and losing Danny Amendola to free agency, Socci said New England’s 11-5 record speaks to the improvements they have been able to make.

Sunday’s matchup will be the eighth time quarterbacks Tom Brady and Philip Rivers have faced each other. Rivers has come up short in each game so far, going 0-7 against Brady. However, almost all seven matchups had close final scores.

The #Chargers are 0-7 against Tom Brady and the Patriots, including playoffs, since Philip Rivers became the starter in 2006

They travel to New England next Sunday@Patriots @Chargers

The Chargers will be on the road for Sunday’s game, likely taking the field in extremely cold conditions. However, despite changes in temperature, LA has been a good team on the road this season. With a 7-0 record away from the city of Los Angeles, adjusting to Foxborough might not be too big of an issue for this team.

On the flip side, all five of New England’s losses came on the road, meaning they are undefeated at home this season. Socci said the Patriots played uncharacteristically in each of those losses.

Socci said he expects the Chargers to be strong defensively, especially having four rushers. With Joey Bosa and Melvin Ingram leading the way, pressure will be put on Brady. LA’s physical defense could pose a challenge to the Patriots.

Born and raised at the ballpark! Typically quiet- until it comes to sports. I'm a South Florida native with a passion for baseball nearly as strong as my faith. Grew up in garnet + gold, turned out sporting orange + blue. Likely to be found with a camera. And yes, I take food pictures.
@victoriarossman
Previous Saints look to move forward to the NFC Conference Championship
Next Gators Gymnastics Team Opens Season versus Missouri Tigers