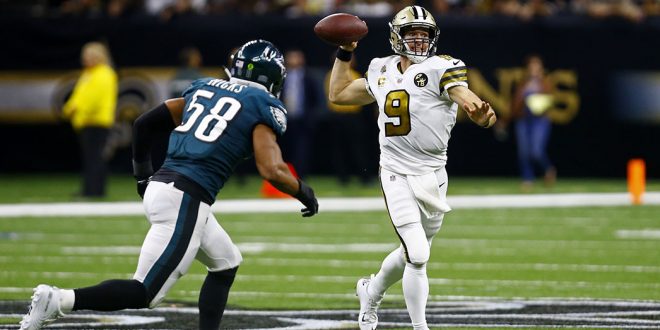 Saints look to move forward to the NFC Conference Championship

The Saints are preparing for the Divisional Round of the NFL Playoffs. With a regular season record of 13-3, and the number one seed in the NFC, it earned them a first-round bye and home-field advantage throughout the playoffs.

Head coach Sean Payton has no doubts that Brees will rise to the occasion this weekend.

Running back Alvin Kamara will also be a key factor to this game, having 883 rushing yards and 14 rushing touchdowns this season. He also logged 706 receiving yards with 4 passing touchdowns. He is a force to be reckoned with and the Eagles will have no easy task stopping him.

With the Saints at home, it is likely they will get the win this weekend. This season the Saints won six of eight at the Dome. In addition, they have won five consecutive home playoff games. Most recently, their 31-26 win against the Carolina Panthers in the wildcard round last year.

This will be the Saints sixth divisional playoff appearance. Last season, they lost to the Minnesota Vikings, 29-24.

The last time the Saints saw the Eagles was only in November, where the Eagles were crushed, 48-7.

Payton is aware of slowing down the Eagles, especially tight end Zach Ertz.

The Saints seem to have nothing to worry about, but the Eagles are hungry for another Super Bowl win after their title last year. The Eagles have a four-game winning streak since week 15 with close win against the Bears last weekend. They now want to prove to everyone that they are Super Bowl contenders once again.

With a win against the Eagles, the Saints will look forward to playing the winner of the Cowboys-Rams game, for their third NFC Conference Championship appearance.

I am a fifth-year journalism major, specializing in sports and media. My favorite sport to watch and cover are college and NFL football. When I'm not doing that, I enjoy hanging out with my cat, going to concerts and traveling.
@sportsabrina
Previous Arkansas looks to pick up back-to-back wins in conference play
Next Patriots Host Chargers In AFC Divisional Round Matchup