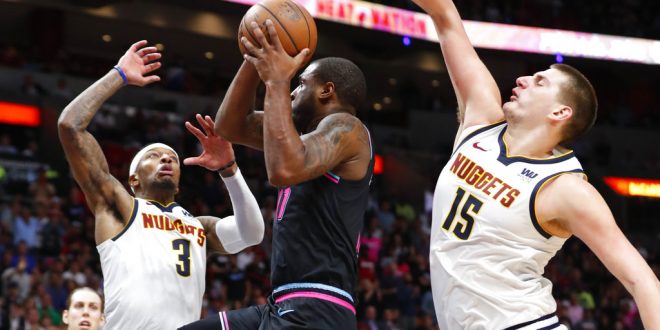 Miami Heat guard Dion Waiters, center, goes up for a shot against Denver Nuggets forward Torrey Craig (3) and center Nikola Jokic (15) during the second half of an NBA basketball game, Tuesday, Jan. 8, 2019, in Miami. The Nuggets defeated the Heat 103-99. (AP Photo/Wilfredo Lee)

The Miami Heat Slip Up In Late Loss to Nuggets

The Miami Heat fell to the Denver Nuggets 103-99, on Tuesday night at the American Airlines Arena.

Waiters was back in the rotation scoring a season-high 15 points in 25 minutes providing a spark to the struggling Heat offense.

The Heat turned its five-point deficit into a two-point lead during the first-half.

During the Heat’s loss, the 21-year-old second year center was on the receiving end of an alley-oop pass from shooting guard Dwayne Wade.

Adebayo went into Tuesday evening averaging 7.8 points, 6.9 rebounds and 2.1 assists over 21.2 minutes per game while shooting 54.6 percent from the floor.

He scored 13 points in Tuesday’s loss to the Nuggets. He shot 6-for-7 from the field and 1-for-2 from the free throw line.

Whiteside Sharp In The Third

Whiteside made his presence felt on both ends during the third quarter.

Whiteside finished the night with 12 points, a team-high 11 rebounds and a game-high three blocks.

While the Heat led a victory slip through their fingers, by the end of the night most eyes were on a fan who ran onto the court just before the clock hit zero.

The incident took place with just .9 seconds left in the game as Nuggets guard Jamal Murray was sent to the line after a Heat foul.

Udonis Haslem continues to lean towards retirement after the season as he tweeted a link to an article on Monday.

Haslem and Wade, both joined the Miami Heat as rookies in 2003, and both signed one-year deals before this season.

Wade has already started exchanging jerseys with opponents throughout the season, but Haslem did not confirm whether or not this season will be his last- until now.

The Miami Heat host Boston on Thursday at 7 p.m., the first of four meetings this season between the teams.

The Nuggets host the Los Angeles Clippers on Thursday at 9 p.m., the midpoint of a five-game, seven-night run for the Nuggets.