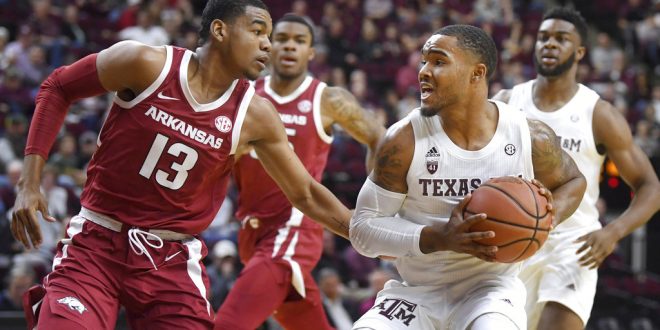 After holding off Texas A&M on the road to open conference play, the Razorback return home to take on the Florida Gators.

The Razorbacks sit at 10-3 on the season and will look to improve their record tonight. The team was led by junior guard Jalen Harris who recorded 15 points and nine assists in the win against the Aggies. In addition, Desi Sills and Gabe Osabuohien had a career night in that road victory and will look to carry that confidence into tonight’s game.

In order to continue their winning ways, Arkansas will need to lean on Harris and Daniel Gafford. Gafford leads the SEC in double-doubles and is top five in field goal percentage, rebounds, blocked shots and points. Harris ranks first in the SEC and second in the NCAA  in assist-to-turnover ratio and leads the conference in assists per game.

“He kind of saved us because he redshirted,” Matt Zimmerman the director of basketball operations said of Jalen Harris. “None of us knew what to expect because he’s never played in an SEC level game. We had no idea what we were going to get from him and he’s been much better than we thought.”

How they match up

The game should feature many shots from behind the arc as both teams are in the top five in three-pointers attempted in the SEC. Florida has been one of the better teams defensively in the SEC but ranks second-to-last in scoring among other conference teams.

“Defensively, it’s going to be man-to-man for the most part and mixing in a little bit of zone,” Zimmerman said. “[Coach Anderson] is going to try to put a lot of pressure on, as much as he can, but more of that will be at the half-court.”

Another big aspect of the game will be how the bench plays. Arkansas has been known to go 10 or 11 deep, but that has changed this season. Instead, Coach Anderson has used eight or nine guys which is a reason he doesn’t run full-court press as much anymore. In order for the bench to have success, they will need to be more consistent, something Zimmerman emphasizes.

As the Razorbacks hope to be contenders in the SEC, they’re going to need to have some confidence to compete with the likes of Kentucky and Tennessee and that could all start tonight with a solid showing against the Gators.