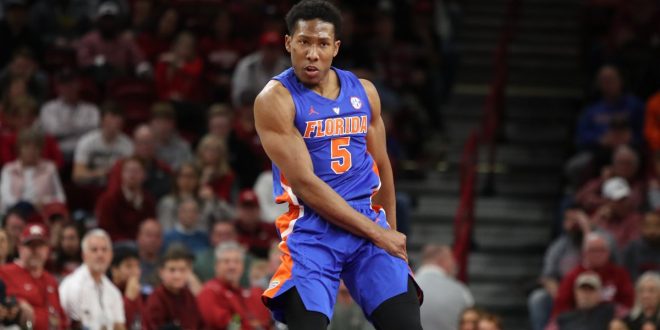 Gators Get First SEC Win in Victory Over Arkansas

Mason Jones paced the Razorbacks with a career-high 30 points on 7-13 shooting, including four made threes. The Gators had their way with Daniel Gafford, who was in foul trouble most of the night. The held him to nine points and 12 rebounds in 27 minutes.

The Gators extended their lead to 16 with 9:13 left in regulation and the game seemed out of reach for Arkansas. The young and inexperienced Razorbacks fought all the way back and cut the lead to two and a chance to tie with 30 seconds left.

Mason Jones missed a jumper and Adrio Bailey missed a put-back attempt. Kevarrius Hayes secured the rebound and KeVaughn Allen closed out the game with clutch free throw shooting, who finished 11-12 from the charity stripe.

The Gators held three of the Razorbacks’ top four scorers (Daniel Gafford, Isaiah Joe and Jalen Harris) to 17 points on 6-19 (31.6%) shooting. Joe, who has averaged 15.5 points per game, had a particularly rough night shooting the basketball. He finished 2-10 overall and 2-9 from three.

Gafford, who is a projected NBA first round pick, has been dominant for Arkansas this season. Before tonight, he was averaging 17.0 points, 9.5 rebounds and 2.4 blocks per game. The Gators did a great job limiting his paint touches.

To make things worse for Arkansas, excluding Mason Jones, the team shot 8-37 (21.6%) from the field. They also did not score a single bench point and had two second chance points.

The Gators also struggled with only five second chance points and seven points off of 16 forced turnovers. KeVaughn Allen shined in his home state, carrying the Gators to their first SEC victory of the season.

#Gators go on the road & get a W behind 18 from KeVaughn Allen. In case you missed it, see all the highlights…#GatorsHoop pic.twitter.com/UNKYARs3h3