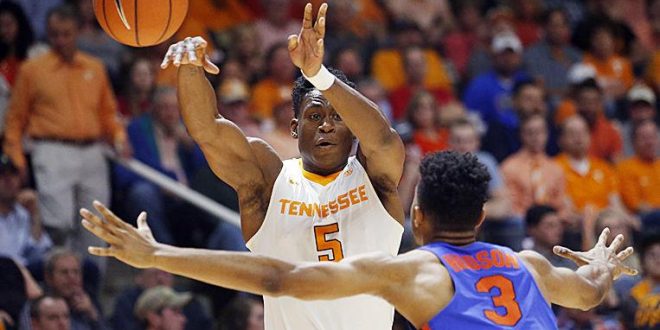 The Florida Gators and Tennessee Volunteers ranked atop the SEC last season, but are currently heading in two different directions.

Tennessee is strutting into Gainesville with a 13-1 record (2-0 SEC), while Florida is struggling to find their footing (9-5/1-1). The Gators avoided disaster at Arkansas as they almost blew a late 2nd half lead for the second game in a row.

It is expected to be a sell out crowd at the Exactech Arena when Florida and Tennessee tip off at 6pm on Saturday evening.

Historically speaking, the Gators have faired well against the Vols at home as they hold a 35-24 advantage in Gainesville. Both teams have been neck and neck when it comes to the last ten match-ups between the two, with each team winning five games.

This will be the second time this year that Florida will have an opportunity to take down a big time opponent at home. The Gators fell short against #10 Michigan State in December. The eyes of college basketball will be set on the Gators as they try to take down a team with legitimate national championship aspirations.

Tennessee has been absolutely dominant this year because of the play of co-stars Admiral Schofield and Grant Williams.

Schofield bursted onto the scene last season and is averaging 18 points and 6.2 rebounds per game. The 6’6 big man from Zion, Illinois has become a deadly three-point shooter, shooting 44.9% from beyond the arc.

Williams, who was the 2018 SEC Player of the Year, is an even bigger problem than Schofield. The junior is averaging a whooping 18.8 points, 7.8 rebounds, 3.9 assists, 1.6 blocks and 1.1 steals per game on 57.2% from the field and 40.0% from three. Williams is a major low-post presence and can spread the floor with ease. He has the bulk to guard players four inches taller than him and has the quickness to take bigger defenders off the dribble.

Williams and Schofield are both matchup nightmares for any opposing team.

Kevarrius Hayes, Keith Stone, Isaiah Stokes and Keyontae Johnson will certainly have their work cut out for them trying to stop this dynamic duo.

All out effort for a full 40-minutes. @KevarriusHayes on Saturday's game with @Vol_Hoops. #GoGators pic.twitter.com/m1lDhRdwtK

In order for the Gators to have a chance to pull off the upset, they will need their senior scorers to step up. Freshmen Andrew Nembhard and Noah Locke have done a great job filling the scoring void, but it is time for Florida to counter the Vols experienced attack with some tenure of their own.

KeVaughn Allen and Jalen Hudson will need to be as involved as possible. UF cannot afford for Allen to only take six shots like he did in the loss against South Carolina. With Hudson finally out of Mike White’s “dog house,” Florida fans are hoping that the senior can regain his form from last year and jumpstart the offense.

Florida is currently a two point underdog in the eyes of oddsmakers. Kenpom.com has gives the Gators a 41% chance of winning on Saturday night. Tennessee is projected to win by a final score of 69-66.

Florida has an opportunity to put their first major win on their resume on a national stage.

A live broadcast of the game can be seen on ESPN while the match-up can be heard on 98.1 FM ESPN Gainesville/850 AM WRUF.

It's about that time!