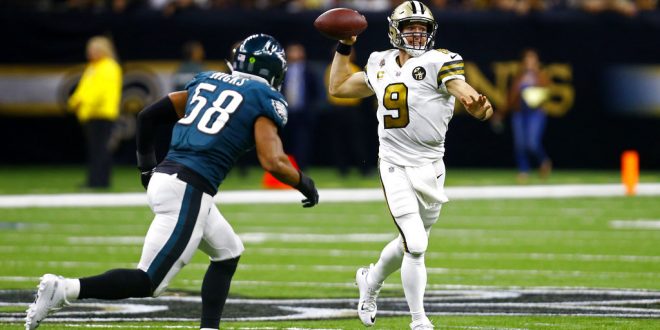 Saints Look To Ground Eagles In NFC Divisional Round

On Sunday, the NFL Playoffs will continue with the divisional round and the NFC matchup is an intriguing one. The Philadelphia Eagles will look to continue their surprising run into the postseason when they head to New Orleans to face off against Drew Brees and the Saints.

Drew Brees has had an MVP-caliber year, and it’s not even close. Just look at the 17-year vet’s stat line this season: 364-489, 3992 yards, 32 touchdowns and only five interceptions. After looking at these numbers, there’s no wonder why the NFC South division champs sit at the top of the conference.

Brees is almost unstoppable in the Superdome, and Philadelphia will have its work cut out for them.

Carson Wentz was unable to stay healthy once again this season, giving way to backup QB Nick Foles in Week 15. The Eagles had a bleak playoffs hope at the time, sitting at an overall record of 6-7. They needed to win out the rest of their games to have a shot at the post season. Foles helped lead Philly to improbable wins over the LA Rams and Houston Texans before taking care of business against the Washington Redskins.

The reigning Super Bowl MVP didn’t necessarily fill up the box with eye-popping numbers, but he’s been managing the games well, including a 16-15 Wild Card victory in Chicago last weekend.

Brees and Foles, both Westlake High products, will go head-to-head for the first time since 2014, when Brees and the Saints clipped Foles and the Eagles 26-24 in the Wild Card round.

The New Orleans Saints defense has improved mightily this season. However, the offensive prowess of the team is still the bigger reason why the Saints are sitting at 13-3. New Orleans is ranked inside the top 12 in every major offensive category. That includes being 3rd in points per game (31.5), 6th in rushing (126.6) and 8th in total yards (379.2).

Furthermore, Brees’ weapons are limitless in the skilled positions. Running backs Mark Ingram and Alvin Kamara are arguably the most impressive duo in the NFL. Wide receiver Michael Thomas continues to have a solid year, pulling in 125 receptions with 1,405 yards and nine touchdowns. That three-headed monster will need to be slowed down by the Eagles defense if Philly wants to keep the game close.

In order for the Eagles to have a chance in this game, the defense will need to make stops and force turnovers. Philadelphia’s offense doesn’t have the firepower to get into a shootout with Brees and company. The game will get ugly if Philly’s defense can’t get Drew Brees off the field.