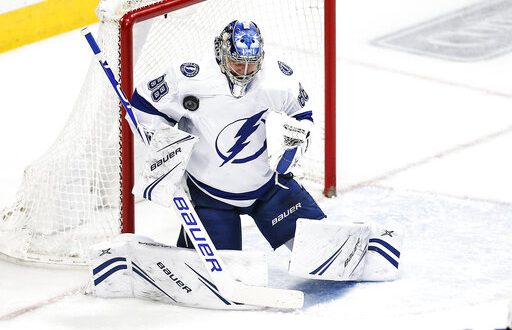 Jon Cooper’s team was in danger of suffering just that on Tuesday night in Dallas, but a rather composed performance ensured they didn’t.

Goals from Ondrej Palat and Mikhail Sergachev and Andrei Vasilevskiy‘s third shutout of the season got the Eastern Conference leaders back to winning ways following their 5-1 defeat to the New York Islanders on Sunday.

A quick start was just what Cooper wanted to see out of his team in Texas, and he got just that.

The Stars allow an average of just 2.64 goals per game this season. The first goal on the road was always going to be key for the Bolts.

The scoring opened at the 7:55 mark when Palat steered in a clever pass from Steven Stamkos after a blistering team move by the Lightning. The goal helped settle the Lightning on the road. However, Dallas continued to place Vasilevskiy’s net under heavy fire.

The shot-stopper denied four power-play chances during the second period alone. He stopped all of Dallas’ 35 shots in the game.

“He was in the zone tonight,” said Cooper. “That’s how you put a goose egg up on the board.”

After two periods, the Stars had almost double the shot attempts of the Bolts (17-9). Some questionable finishing from Dallas and a bit of Vasilevskiy’s heroics kept the Stars’ attack at bay the entire match. Jim Montgomery’s team squandered many scoring chances including a 5-on-3 man advantage in the second period.

“I thought we had a good game tonight. We played a good brand of hockey, we’re just struggling to score goals right now,” Montgomery said following the loss. “We just gotta keep with it, we keep playing like that, the way we’re skating, the way we’re creating really good looks and we’re going to end up on top of a lot of games. Our process was good tonight.”

"We played a good brand of hockey, we're just struggling to score goals right now." Monty acknowledged the lack of scoring but he liked the Stars approach tonight. pic.twitter.com/OV82Efjxwo

In fact, it’s true that the result may have been harsh on the Stars. They were within striking distance until a wicked strike from Sergachev off a faceoff in the third period essentially killed the game.

There were definitely positives for Montgomery and his staff to take from the Stars’ performance against the NHL’s points leaders on Tuesday. Still, Dallas’ struggle to score goals is nothing new. Their average of just 2.57 per game ranks fourth worst in the league.

The loss is Dallas’ (23-20-4) third in a row, as they’ve only mustered four goals in their last five games. Currently sitting at 50 points, Montgomery’s team still has a good shot to make the playoffs if they rectify their goal-scoring issues.

Dallas will host the Los Angeles Kings on Thursday at 8:30 p.m.

The Bolts were as lethal and clinical as can be on Tuesday night. Now at 36-9-2 and 15 points clear at the top of the Eastern Conference, Tampa Bay will face the Toronto Maple Leafs on Thursday at 7:30 p.m.

The Stars couldn't get one past Vasilevskiy tonight. Next up, the Kings are in town on Thursday. pic.twitter.com/9HRpn52D4z

Sports media and management student at the University of Florida. Content creator for ESPN 98.1 FM/ 850 AM WRUF.
@TheEdgarChavero
Previous Gators Drop to 1-3 In SEC Play After Loss to No. 24 Mississippi State
Next SEC Hoops Roundup