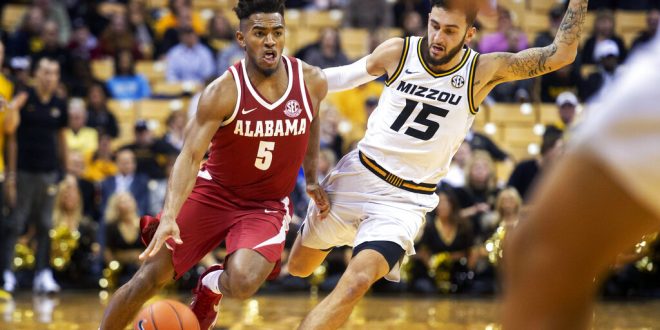 As we move into the heart of conference play in the SEC, the battle for the top continues.  The Tennessee Volunteers are holding steady at No. 1 in the conference with an overall record of 15-1 and 4-0 in conference play. However, the rest of the conference is up for grabs. Wednesday night’s SEC games featured three upsets in front of home crowds.

The South Carolina Gamecocks hold a pretty average record of 9-7 at the moment, however, they are 4-0 in the SEC just like conference leading Tennessee. On Wednesday, South Carolina traveled to Nashville to take on Vanderbilt. Vandy is also 9-7 so far this year but hold a disappointing 0-4 record against SEC opponents. The Commodores were at home and looking to bounce back from a three-game losing streak.

At halftime, Vandy held a ten-point lead and things were looking promising.

Unfortunately for the Commodores, in the second half the Gamecocks would surge on offense and upset Vandy at home by a score of 74-71. South Carolina guard, A.J. Lawson, helped lead the Gamecocks to victory with 24 points of his own.

📊 » @ItsAJLawson leads all scorers with 24 and the game-winning free throws with 23 seconds left / 17 for @BestThingSince_ ALL in the second half / 13 for @kiddbryant25 💪#Gamecocks🐔🏀 pic.twitter.com/bRZ5Us6F38

The No. 14 Auburn Tigers are surging under head coach Bruce Pearl. The Tigers are 13-3 this season with a 2-1 record against their SEC opponents. As SEC play heats up, the true test of Tiger excellence will be decided in the coming weeks.

Basketball fans got a glimpse of that test of excellence in Wednesday’s game against the Texas A&M Aggies. The Aggies have played pretty average so far this season. However, after upsetting an 11-5 Alabama last Saturday and grabbing their first SEC win, the Aggies season was maybe looking up.

In the game between the Aggies and the Tigers on Wednesday night, Auburn jumped out to a quick lead and was up by 16 points heading into the second half. The nearly 20-point-lead was just too much for the Aggies to bounce back from.

Texas A&M would suffer a disappointing 85-66 loss in front of their home crowd and fall to 7-8 on the season. This Saturday the Aggies will look try to pick up a win against another Tigers team as they host the Missouri Tigers on Saturday afternoon at 3:30 p.m. Auburn will also be back on the hardwood on Saturday afternoon as they take on the No. 12 Kentucky Wildcats at 4 p.m.

The Alabama Crimson Tide and the Missouri Tigers have similar overall records, but what makes them just a bit different right now is how they’ve played in conference.

The Tide traveled to Missouri on Wednesday looking to redeem themselves after back-to-back losses against conference opponents, LSU and Texas A&M. The Tigers’ luck in conference games wouldn’t change against Alabama on Wednesday night either. The Tide outscored the Tigers in each half and held on to win on the road 70-60.

Missouri is 0-3 so far in SEC games and is on a current three-game losing streak. With conference play now in full swing, the Tigers need to find their winning streak and turn their luck around. Missouri and Alabama both return to action in their respective road games this Saturday afternoon. The Tigers will take on the Aggies at 3:30 p.m. and Alabama faces top-tier Tennessee in Knoxville at 2 p.m.

The SEC is still, for the most part, up for the taking. Each team, excluding the Volunteers, has been fairly hit-or-miss thus far and most have shown potential. It wouldn’t take much for someone to knock the Vols down a few spots and claim the SEC thrown. There is still more than a month of SEC basketball left to play out and that’s more than enough time for something exciting to happen in this unpredictable conference.