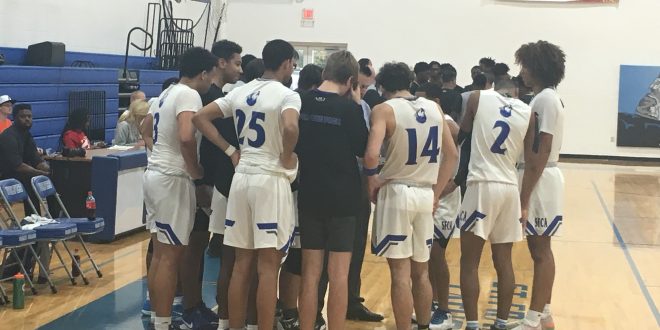 This game had everyone in the audience on the edge of their seat with both teams scoring back to back. The Wolves were able to keep a lead of about six points until the last quarter, where the Knights tied the game with only two minutes remaining. After the Knights took the lead with only 1 minute and 30 seconds remaining, the Wolves were able to keep a close game after senior guard Calvin Littles’ three-pointer at the 40-second mark. After a close game, the final score was 49-44 with the Knights winning for the second time.

Here with partner @Camila_maffuz with @ESPNGainesville at the St. Francis varsity basketball game against Ocoee! Wolves up by 6 at halftime. pic.twitter.com/A5jRNtuPuW

One of the players that really stood out in this game was sophomore guard Aiden Newman. Newman was able to score nine points for his team including two, 3 pointers. We were able to catch up with him after the game.

A couple other players that shined in this game were sophomore forward Antonio Rizzo and junior forward Miguel Yepez. Antonio Rizzo scored ten points for the team, while Miguel Yepez scored 12, making all six free throws.

Sara Dastgerdi is a current student at the University of Florida.
Previous Chiefs and Patriots Set to Face Off in AFC Championship Game
Next Gators Women’s Basketball Back on the Road Against Ole Miss