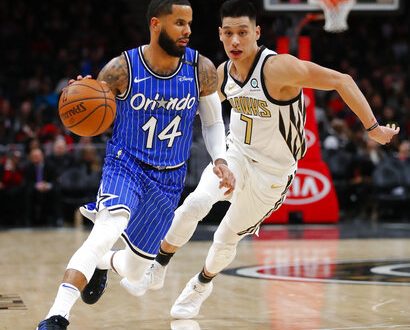 The Orlando Magic took down the Atlanta Hawks 122-103, while the the Miami Heat lost to the Boston Celtics 99-107. With the playoffs in the near future, every game counts.

Magic Pull Out a Road Win

11th in the Eastern conference, the Magic got a sizable lead on the Hawks, giving them a chance to join the playoff conversation. Magic center Nikola Vucevic had an amazing night. He scored 29 points, had 14 rebounds, and 2 blocks. His contribution to the team has been pivotal in their efforts to make a playoff spot. Vucevic is joined by guard Evan Fournier, who also scored 29 points and had 7 assists.

In the first quarter, the Hawks led 44-38. However, a huge scoring drive by the Magic put them in the lead for the rest of the game. Off the bench, guard Terrence Ross scored 16 points, had 7 assists, and 5 rebounds, furthering the Magic’s lead. This win ended a three-game losing streak, and will hopefully start a winning streak for the Magic going forward.

The Heat fought hard last night to try and pull out a win against the Celtics, but Kyrie Irving’s 26 points and 10 assists became too much to top. The Heat’s players off the bench clocked a lot of minutes last night. Derrick Jones and Dion Waiters both had 18 point games.

They were able to get the Heat to within five points with less than five minutes left in the game, but a Celtics scoring drive closed their chance at winning. The Heat remain in 7th for the Eastern Conference, meaning their shot at a playoff spot is still in their midst.

3rd-year Telecommunications student at the University of Florida. Also a member of the Women's Track and Field team.
Previous SEC Basketball Preview: Auburn at South Carolina
Next Gators Look to Keep Momentum Going Against Texas A&M