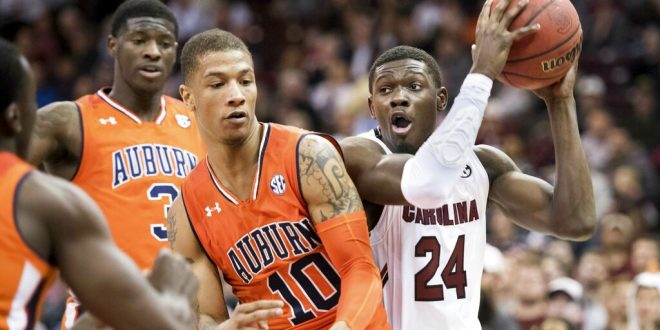 It was a heartbreaking night last night for No. 16 Auburn as they picked up their second straight loss, falling at South Carolina 80-77. Forward Felipe Haase’s 3-pointer with 30.3 seconds left really sealed the deal for the Gamecocks. This dropped the Tigers to 2-3 in the SEC and moved South Carolina up to 5-1.

Auburn fell behind by double digits twice in the game and even their 12-0 run in the second half wasn’t enough. The Tigers even lead the game 77-75 with 56.3 seconds to go, but couldn’t put up any more points. The last drive put up an opportunity for Auburn but poor execution lead to a closing deal on the loss.

Forwards Horace Spencer and Anfernee McLemore made up some time of Austin Wiley’s absence but foul trouble got in the way. Chris Silvia’s size was just too much for the Tigers to match. 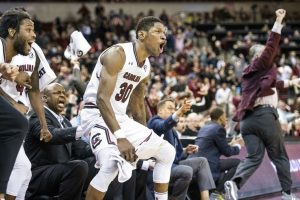 South Carolina’s powerhouse forward Chris Silvia was the main difference in the game. The Tiger’s defense just couldn’t guard him. The 6-foot-9 senior had a career-high of 32 points and 14 rebounds. This put him at his 20th career game with double-digit points and rebounds. He made 11 of 12 shots and was 10 for 11 from the free throw line.

Jared Harper and Bryce Brown both lead Auburn in points with 17 each. Harper was 2-3 from the free throw line putting up two free throws in the last minute to take the lead for the Tigers. While Brown was 6-7 on free throws.

Auburn is on the road again this weekend for another SEC matchup against the Mississippi State Bulldogs. The Bulldogs are also coming off a loss against Kentucky as they are now 14-4 on the season. Game time is set for 8:30 p.m. on Saturday.

The Gamecocks will travel to Oklahoma State to take on the Cowboys. The Cowboys’ record is 8-10 on the season.

Previous 425 for 425: Rivera becomes baseball’s first unanimous Hall of Famer
Next Mississippi State No Match for No. 8 Kentucky