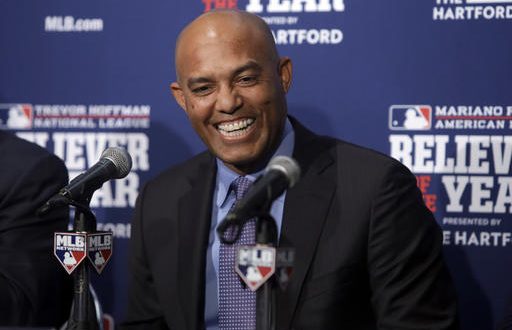 There are quite a few things that closer Mariano Rivera is known for.

Mo has won five World Series titles with the New York Yankees. Mo is the MLB’s all-time leader in saves (652). When Mo entered, he was the “Sandman.”

In a more than fitting manner, Rivera will now also be known as baseball’s first ever unanimous Hall of Famer. Three other names were inscribed into Cooperstown on Tuesday alongside him: Roy Halladay, Edgar Martinez and Mike Mussina.

The departed Halladay and Rivera both became Hall of Famers in their first year on the ballot. Meanwhile, Martinez was inducted by the Baseball Writers’ Association of America on his 10th and final season.

Rivera, a native of Panama, spent his entire 19-year career donning pin-stripes. The Yankees spent just $2,500 to sign Rivera out of Panama back in 1990. It was a move that would shape baseball history for the next two decades.

Rivera would rack up 42 post-season saves throughout his career with a minuscule 0.70 ERA. He was named World Series MVP in 1999 against the Atlanta Braves.

Ken Griffey Jr. had come the closest to becoming a unanimous Hall of Famer prior to Rivera. Griffey received 99.3 percent of votes (437 of 440 ballots). If anything, Rivera’s feat highlights the excellence of this year’s Hall of Fame class.

Rivera spoke about what this accomplishment meant to him on Tuesday.

Rivera’s teammate for eight seasons (01′-08′), Mike Mussina, earned his induction on his sixth year on the ballot. Mussina collected 270 wins for the Yankees and Baltimore Orioles throughout his career. While he could never capture a World Series title, “The Moose” still held a respectable 3.42 ERA in his playoff career.

Infamously, twice Mussina came within a batter from throwing a perfect game. On both occasions, his attempts for perfection were thwarted in the 9th inning by the opposing offense.

The former 11th-round pick actually said he was surprised to get inducted this year because of his low numbers last year.

The third pitcher in this year’s class, unfortunately, could not live to see his career be enshrined into Cooperstown. Baseball lost one of it’s most respected professionals when “The Doc” passed away on Nov. 7, 2017 in a tragic plane crash over the Gulf of Mexico.

Halladay culminated just over 200 wins with Toronto and Philadelphia during his playing days. He’s also the only pitcher to throw a perfect game and a no-hitter in the same season.

For 10 seasons now, baseball fans from all over were wondering if Edgar Martinez would get into the Hall of Fame. We have our answer.

Seattle’s longtime designated hitter produced a stellar career with the Mariners. He slashed .312/.418/.515 during his 18-year career, but Martinez was never the flashiest of players. He only mustered 309 home runs in his career, and that, mixed with his inability to play the field had kept him out of Cooperstown until now.

Martinez follows Frank Thomas as just the second DH in the Hall of Fame. His exclusion from Cooperstown had for a long time been a running joke around MLB fans, but his induction will now surely pave the way for more designated hitters.

On the other side, the likes of Barry Bonds, Roger Clemens and Curt Shilling all fell under the desired threshold to be inducted (75 percent of votes). Fred McGriff was also eliminated from further consideration after his 10th season on the ballot.

2019’s Hall of Fame Class will be remembered for a few reasons. While most will understandably focus on Rivera’s unheralded accomplishment, the stellar careers of the three other inductees are now up there alongside him in Cooperstown.

Sports media and management student at the University of Florida. Content creator for ESPN 98.1 FM/ 850 AM WRUF.
@TheEdgarChavero
Previous Without Keith Stone, the Gators’ Frontcourt Will Now Have to Adjust
Next South Carolina Upsets the No. 16 Auburn Tigers