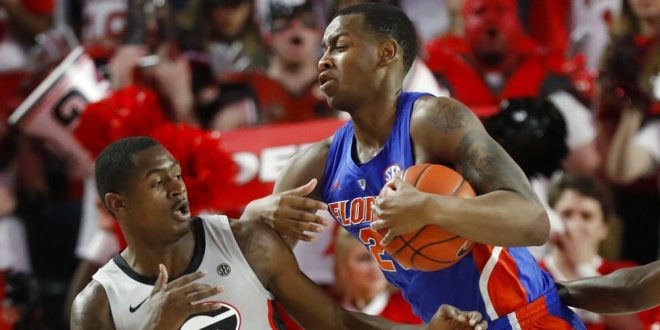 Without Keith Stone, the Gators’ Frontcourt Will Now Have to Adjust

The Thin Gets Thinner

The team lost Gak to injury, Johnson to transfer, and now Keith Stone has been diagnosed with a torn ACL. With those losses, Florida isn’t carrying a single healthy power forward on the roster. Stone was only averaging about 6 points and 4 rebounds per game, but he was 5th on the team in minutes played.

Stone’s versatility on both sides of the ball makes him a valuable asset, but the team will have to adjust.

Thanks for all the wishes and prayers I’ll be back soon.

What Will the Gators Do?

The middle of conference play isn’t an ideal time to be reworking your rotations, but Mike White is going to have to work through that challenge. White has proven that he’s not afraid to put out lineups with 4 guards- he’s even started Nembhard, Locke, Allen, and Hudson together multiple times this season.

True freshman Keyontae Johnson is now being thrusted into a key role as the starting power forward. Johnson is only 6-5, but at 225 pounds he has the size and athleticism to compete in the paint. Against Texas A&M, Johnson held his own and hustled his way to 9 rebounds and one block. Coach White had some encouraging comments about Johnson’s performance:

It seems unlikely that Hayes, Bassett, and Stokes will share the court with each other unless Florida is playing a team with a lot of size.

Players Have to Step it Up

Florida is going to have quite the challenge rebounding the ball with smaller players. There has to be a specific emphasis on rebounding from the team. In addition, the Gators are going to have to tweak their offensive approach.

The loss of Keith Stone takes away the threat of the pick-and-pop and also hurts their paint offense. With smaller lineups, Florida’s guards are going to have to rely on their speed to get to the basket. On the other hand, smaller lineups may lead to better spacing and better shooting percentages from outside if the team really commits to 4-guard lineups.

The spacing seemed to work wonders in Florida’s recent win against Texas A&M as the team hit 18 out of 37 three point attempts behind the hot hands of KeVaughn Allen and Noah Locke.