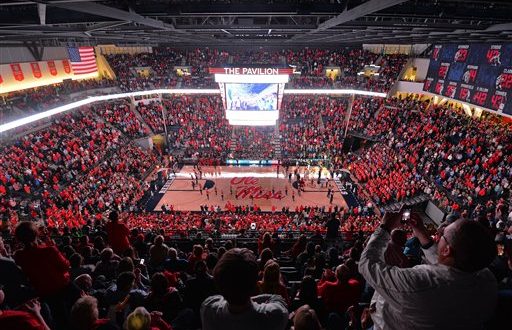 Fans fill the Pavilion at Ole Miss during player introductions before an NCAA college basketball game between Mississippi and Alabama in Oxford, Miss., Thursday, Jan. 7, 2016. Mississippi won 74-66 in the first game in the new facility. (AP Photo/Thomas Graning)

An interesting matchup is upon us on as No. 20 Ole Miss men’s basketball team will host No. 24 Iowa State this Saturday in an SEC/Big 12 Challenge.

Head coach Kermit Davis and the Rebels have given the Ole Miss faithful an exciting season thus far. Going 4-2 in the SEC and 14-4 overall, this Rebels basketball team is a huge improvement from what we saw last season.

Although they are coming off a 21 point blowout by an unranked Alabama team, they have still given us good basketball throughout the season having big wins over teams like Auburn, Mississippi State, and Baylor.

As a team, Ole Miss is averaging 77.9 points per game and giving up 68.4 shooting 48 percent from the field. Led by Breein Tyree and Terence Davis, the Rebels have been playing a widespread offense that has made other teams fatigued early.

On defense, they have shown aggressiveness in order to stop big men from scoring inside the paint. If they want to come out on top on Saturday, Ole Miss is going to have to move the ball and focus on their miss matches.

Sitting at No.4 in the Big 12, head coach Steve Prohm and the Cyclones have a talented roster beating out big teams such as Missouri and Oklahoma State.

Coming off a tough four-point loss to No. 9 Kansas, Iowa State will be looking to stay in the top 25.

The Cyclones, like the Rebels, are an aggressive offensive team always fighting for boards and spreading the floor to look for the open man beyond the arc. Shayok and freshman Tyrese Haliburton shoot over 40 percent from the three-point line and can hurt the Rebels if they get the open look.

Both teams are coming off losses going into Saturday so both will be hungry to remain in the top 25.

A key matchup to look for will be how Davis and Shayok face up against each other. Both aggressive players that play key roles for their teams.

If Iowa State can keep their tempo and pace up they can outrun Ole Miss on some fast breaks. But on the other side of the ball, if Ole Miss spreads the ball the way they have all season we can see the Cyclones getting tired early in this game.

One of the more interesting matchups in the SEC/Big 12 challenge is set to tip off on ESPN at 12 p.m. Saturday.