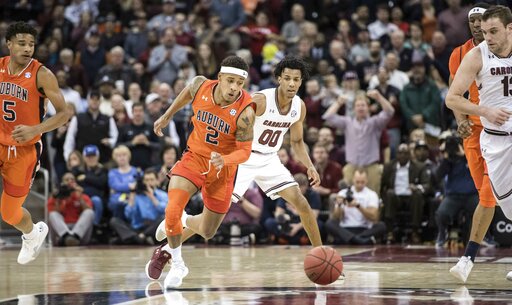 Auburn Tigers Look to Bounce Back as They Visit Mississippi State

With both the Auburn and Mississippi State coming off some tough losses, the 13-5 Tigers and 14-4 Bulldogs are meeting up for a big SEC match-up.

Auburn and Mississippi State have both had a tough stretch recently. Auburn has lost two games in a row against, and Mississippi State is coming off a double-digit loss at Kentucky. Both teams are 2-3 in their last five games and both the Bulldogs and Tigers have lost to the same exact opponents: Kentucky, South Carolina, and Ole Miss. Auburn, who still holds the 16th overall rank in the AP Poll for now, has lost their last two games by a combined five points. Their last loss at South Carolina has led to unhappy reactions from fans. The Tigers and Bulldogs are both 2-3 in conference play, so this is a huge game on each side.

Not the result we wanted.

This game should be a battle of the backcourts. For Auburn, they have the duo of Bryce Brown and Jared Harper. Brown, the senior, is the team’s leading scorer and is averaging 16.9 points per game. Harper, the 5-10 junior, is a quick playmaker with scoring capabilities. He’s averaging 15.3 points per game and 6.6 assists per game.

In Mississippi State’s backcourt, the Bulldogs have the combo of Quinndary Weatherspoon and Lamar Peters. Weatherspoon is a 6-4 senior who is averaging 16.8 points per game along with 5.7 rebounds and 2.7 assists. Weatherspoon’s physicality could provide an advantage for the Bulldogs. Peters, like Jared Harper, is a smaller guard with a knack for finding the open man. He’s averaging 12.8 PPG and 5.7 assists per game.

Both of these teams run effective offenses and they like to shoot the ball from three. Auburn is making almost 11 threes a game and hitting them at a 36.7% rate. Mississippi State is shooting over 37% from deep and making almost 9 threes per game. This should be a very close game between two hungry teams.

The Tigers and Bulldogs will tip off on Saturday night at 8:30 p.m. from Starkville on SEC Network.