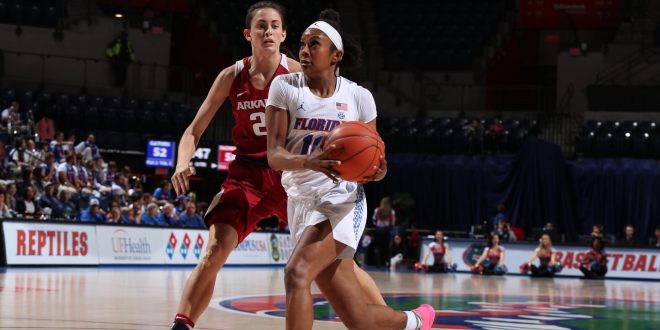 Gators fall short in home battle against the Razorbacks

Gators Women basketball fell short to the Razorbacks in yesterday’s match up 73-83.

The Gators fought hard, starting out the game leading Arkansas 19-7 after the first quarter, but were not able to keep their momentum up against the Razorbacks. Although the Gators often lead through the game, there were several lead changes throughout the match up.

Defensively, it was a tough one for the Gators as they allowed a lot of second chances points and allowed Arkansas to score 30 points in the 2nd quarter and 28 in the 3rd.

The Gators were able to get it done on the offensive side landing three players in double-figures.

Leading the Gators in scoring was Funda Nakkasoglu scoring 20 points points and dishing out four assists. This double figure game was her ninth one this season.

Smith had this to say about her and her teammates on how finding each other throughout the game is important.

“Ball movement is very important. A lot of the times, the plays that we run, we execute really well. And tonight we did a really good job of doing that. We know how to get our teammates the ball when they are open and when they’re hot.  I think this is one strength that this team really does have.“

The Gators shot the ball impressively all night from the perimeter draining 12 three pointers.

Up Next for  The Gators

The Gators will be on the road for their next two games. First, they head to Knoxville on Thursday to face Tennessee.