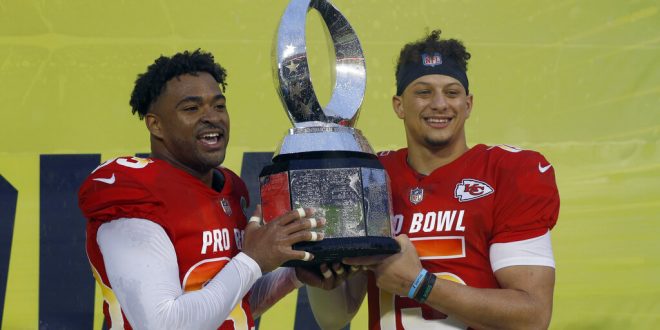 The AFC defeated the NFC 26-7 to take home the 2018 Pro Bowl. This is the AFC’s third consecutive victory since the league went back to the conference vs. conference format in 2016.

This could’ve been the wackiest, weirdest and most boring Pro Bowl in recent memory — and that’s really saying something. It was cold and rainy in Orlando, offensive players were throwing interceptions and defensive players were catching touchdowns.

The only normal part of this “football” game was Patrick Mahomes throwing all over the defense. He recorded 156 yards passing and a touchdown in less than a quarter. His teammate, fullback Anthony Sherman, recorded three receptions for 92 yards to go along with a one-yard touchdown run.

The NFC had an opportunity to make the game interesting early in the second half as Dallas Cowboys’ running back Ezekiel Elliot ran a fake punt for 22 yards. This led to the interception by Adams.

Jacksonville Jaguars’ star corner Jalen Ramsey actually caught a touchdown pass to end the game and finish off a dominant day for the AFC.

Perhaps the most exciting part of the game happened after the game was over. Future hall of fame tight end Jason Witten was tasked with presenting the trophy to the MVP’s. Let’s just say this wasn’t one of his biggest accomplishments.

As the AFC took home the victory, it’s their players who also earn a little more of a reward. The players of the winning team receive a $67,000 bonus while the losing team gets $39,000 per player.

With the Super Bowl next week, it was good to see the games biggest stars out on the field one last time before the season comes to a close.