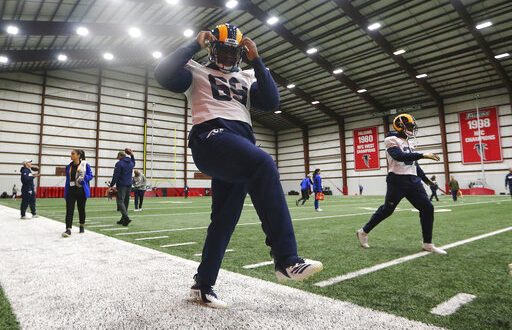 The last time the Rams were in the Super Bowl Kurt Warner threw touchdown passes to Marshall Faulk and Torry Holt in a city known for its gigantic archway.

Fast forward over 15 years and it’s now Jared Goff with Todd Gurley and Brandin Cooks in the City of Angels.

Only one thing remains unchanged: their opponent – Tom Brady, Bill Belichick and the New England Patriots.

“It’s the biggest game of most of our lives,” cornerback Marcus Peters said. “Take it as what it’s going to be, you enjoy the moment.”

A Motto for the Big Game

Rams Head Coach Sean McVay explained his team adopted a new “We not me” mindset for the last game of the season.

McVay on his team’s mindset:

“It’s a whole team effort to this thing,” Peters said. “We all put in the work together from the top to the bottom in this whole organization.”

Quarterback Jared Goff said everyone on the team is unselfishly doing it for each other. He pointed to defensive tackle Aaron Donald and running back Todd Gurley as examples.

Goff on Gurley and Donald:

The Rams have a man with plenty of experience facing Brady and Belichick in CJ Anderson. LA’s late-season hero said Sunday will be his eighth time against New England, but believes his experience is relative.

“You always have an edge whenever you play a team multiple times,” he said.  “But, one thing about the Patriots is they change a lot of things up so it’s not really an edge because of all the little in-game adjustments you do.”

McVay said Donald can do it all when it comes to disrupting offenses. He started all 16 games this season recording career highs with 20.5 sacks and 25 tackles for loss.

“He’s one of the few guys where you really see the special talent matches up with probably an even more special work ethic,” he said.

But, LA is more known for it’s offense. That is led by running back Todd Gurley. He followed up a 1,300-yard, 13-touchdown 2017 by racking up over 1,200 rushing yards and 17 rushing touchdowns this season.

Gurley on playing in the Super Bowl:

A main reason for the Rams’s turnaround is the presence of Sean McVay on the sideline. The Rams won the NFC West for the first time since 2003 in McVay’s first year in 2017.

This season is the first time they’ve made the playoffs in back-to-back seasons since doing it in 2003 and 2004. It’s their first Super Bowl appearance since 2001.

“Sean is very transparent,” he said. “That’s not common in the NFL.”

McVay said everything goes back to the foundation in everything they do: relationships. He describes the team as a shared ownership.