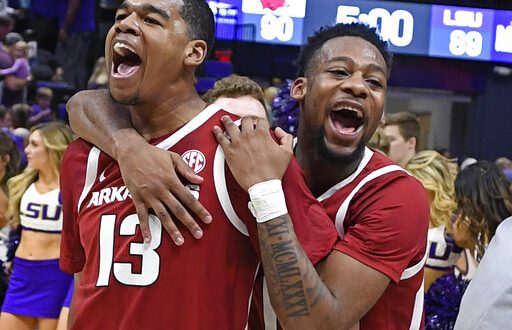 The Arkansas Razorbacks will host the Vanderbilt Commodores this Tuesday in an SEC matchup. Both teams have had their fair share of struggles this season and neither has been very successful in conference play.

Arkansas is 13-8 on the season, going 4-4 within the SEC. One of their advantages heading into tomorrow’s game is that they will be at home. The Razorbacks have won 9 of their 13 games this season at home.

The Razorbacks will go for their third consecutive win on Tuesday. After suffering a loss to Texas Tech, they pulled off back-to-back close wins against both Georgia and LSU. Their win against LSU was a huge upset — after winning by just one point, this led the Razorbacks to their third straight SEC win.

Next 24 hours only, snag some tickets at a reduced rate for any of our remaining home games.

The Razorbacks have been on a great run as of late, and forcing turnovers has been a large part of these wins. As for Tuesday’s game against Vanderbilt, Arkansas head coach Mike Anderson said his team is preparing as usual, understanding that every game is important during this stretch of the season.

Vanderbilt has faced struggles throughout this season, posting a 9-12 record. The Commodores have lost nine consecutive games and are 0-8 in the SEC. Head coach Bryce Drew said the biggest key to his team leaving Fayetteville with a win will be stopping sophomore forward Daniel Gafford.

Another big focus for Vanderbilt will be keeping turnovers to a minimum — Arkansas is great at forcing the ball out. Drew said this will be a major component for his team heading into Tuesday’s game.

Born and raised at the ballpark! Typically quiet- until it comes to sports. I'm a South Florida native with a passion for baseball nearly as strong as my faith. Grew up in garnet + gold, turned out sporting orange + blue. Likely to be found with a camera. And yes, I take food pictures.
@victoriarossman
Previous Tony Gonzalez, Ed Reed highlight 2019 Hall of Fame class
Next Gators Ready for Road Challenge Against Auburn