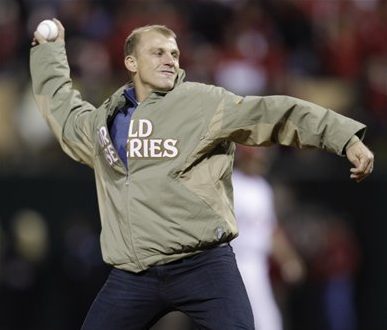 Former Gator David Eckstein Gets a New Job With His Brother

Former Gator and major league infielder David Eckstein will be in the front office for the Pittsburgh Pirates. Eckstein will serve as a special assistant for baseball operations for the organization. For Eckstein, this job has sentimental value because he gets to work with his brother, Rick, who is a hitting coach for the Pirates.

“It was a dream of my father’s that we actually worked together. We always wanted to work together. And now an organization actually is giving us that opportunity,” Eckstein says.

I’m honored and excited to be joining the @Pirates Organization! I’m looking forward to working on the same team as my brother @RickEckstein57 and this is what my Dad always wished for us. https://t.co/z8dqAY4T3N

Eckstein says his job as special assistant will evolve as the season progresses, but he will be assisting his brother and others specifically related to the team’s offense, base running, and fielding during spring training. Once the season starts, he’ll be watching games with other analytics or behind home plate to observe the game from a different viewpoint.

While it has been less than a decade since Eckstein retired, he reflects on the shift of focus on analytics in baseball since he retired. In fact, he knew this shift was inevitable.

Eckstein says he is more than excited to be back in baseball and attributes his brother to getting him back in the game.

From College to the MLB

Eckstein was a walk-on for the Florida Baseball team in 1994; he, later on, earned an athletic scholarship. During his time at Florida, Eckstein excelled as on the diamond and in the classroom: he was a two-time All-SEC player and a three-time member of the SEC Academic Honor Roll.

In addition, Eckstein was a part of the Gator Squad at the 1996 College World Series where the team finished third. In 2007, He was inducted into the University of Florida Athletic Hall of Fame as a “Gator Great.”

The Boston Red Sox drafted Eckstein in the 19th round of the 1997 Amateur Draft. Then in 2000, Eckstein was acquired by the Anaheim Angels and played there from 2001-2004. He was part of the 2002 World Series team in which he led in the major leagues for three grand slams. Then, he went on to play for the St. Louis Cardinals for from 2005-2007.