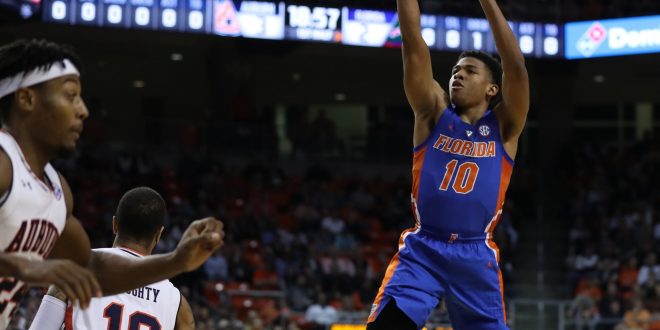 Florida had no answer for the pace of Auburn as the Tigers defeated the Gators 76-62. The Gators have now lost three of their past four games and sit at 4-5 in the SEC.

Kevarrius Hayes led the team with 11 points and 4 rebounds, while Keyontae Johnson added 7 points and 10 rebounds.

The Gators struggled to contain Bryce Brown, who continued his stellar season with 14 points on 6-12 shooting. The senior guard will undoubtedly be in contention for SEC Player of the Year. Chuma Okeke contributed 11 points and 8 rebounds.

The Tigers essentially controlled the entire game. In the first half of action, their lead consistently fluctuated between 8 and 11 points. However, the Gators didn’t allow the deficit to balloon up too much and they continuously stayed within striking distance. A strong driving layup by KeVaughn Allen in the final seconds of the first half cut the Tigers’ lead to 6 heading into the intermission.

Auburn came into the second half playing with a ton of urgency and energy. The lead shot up to 15 less than five minutes into the half. The Gators were able to stay alive for a majority of the second half, but couldn’t overcome Auburn’s offensive firepower.

Bruce Pearl’s team showed why they are ranked as the 9th best offensive team in the country. The Tigers shot 25-52 (48.1%) from the field and 9-25 (36.0%) from beyond the arc. Seven different Tigers knocked down at least one three-pointer. When you have that type of offensive versatility in addition to two elite playmakers in Jared Harper and Bryce Brown, easy opportunities are consistently created.

While the Tigers didn’t put up exceptional shooting percentages, they took advantage of all of their opportunities. They forced 17 Florida turnovers and converted that into 19 points. The Tigers also scored 15 second chance points and 30 points in the paint.

They also didn’t allow the dominant Gators’ defense to bother them, only turning the ball over ten times.

The Gators continued to struggled to score the ball. They shot 46.0% from the field and only converted 4 of their 20 three point attempts.

KeVaughn Allen and Noah Locke extended their shooting struggles, combining to go 2-8 from beyond the arc.

Allen had a really difficult time taking care of the ball, ending up with a season-high 6 turnovers. Keyontae Johnson also had 5 turnovers. In a hostile environment against an explosive offense, the Gators can’t afford to be turning the ball over 17 times.

They spent over 36 minutes of action trailing. Florida has been able to hang around against every single opponent besides Florida State, but Auburn’s pace, versatility and energy proved to be too much for the Gators.

The Gators continue their really rough stretch of games as they hit the road to take on the No. 1 Tennessee Volunteers on Saturday at 4:00 p.m. The game is set to be aired on ESPN.