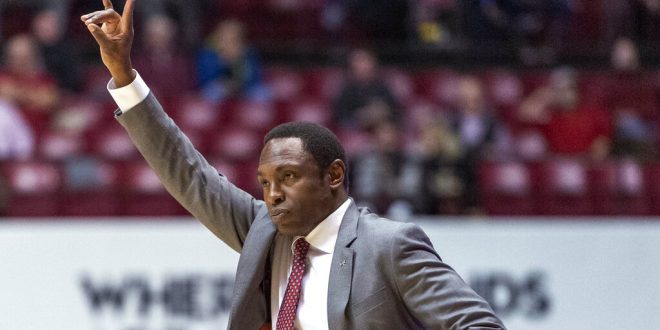 Alabama coach Avery Johnson signals in a play during the second half of the team's NCAA college basketball game against Mississippi State on Tuesday, Jan. 29, 2019, in Tuscaloosa, Ala. (AP Photo/Vasha Hunt)

Bulldogs and Crimson Tide set to do battle in Tuscaloosa

At the half-way point of the SEC conference season, there are still many teams that have ground to make up. Two of those teams will meet Wednesday, when the Georgia Bulldogs (10-11, 1-7) travel to Tuscaloosa to play the Alabama Crimson Tide (13-8, 4-4). The Tide find themselves right around the bubble, while the Bulldogs have some work to do.

Both teams will meet tonight after losing their last time out. Georgia lost on their home court to South Carolina and the Tide dropped one on the road against their rival, Auburn.

Dawgs hoping for stronger second half

With half of the conference schedule in the books, the Bulldogs find themselves with a lot of work to do. At 1-7 in the conference, Georgia is currently tied for the second-worst conference record in the SEC. Now with their backs against the wall, head coach Tom Crean is looking for his team’s energy to shift.

It hasn’t been the first season many expected with Crean in charge of the Bulldogs, but there’s still a lot to play for. Now looking to turn the tide on their conference season, Crean is looking to get his players to limit mistakes.

Led by Rayshuan Hammonds and Nicolas Claxton, the Bulldogs are looking to get things clicking as they prepare for a strong conference close.

Half way through conference play, the Crimson Tide currently find themselves as one of the First Four teams into the NCAA Tournament according to ESPN’s Bracketology. But head coach Avery Johnson is taking it one game at a time and is focusing solely on Georgia at the moment.

Preparing for the Bulldogs, Johnson knows his Tide team will have to do all they can to limit Georgia’s size.

Donta Hall has been leading the way for the Tide the past few weeks and has been praised by coach Johnson for his effort on both sides of the ball. Over the last five games, Hall is averaging 13 points a game.

Tip-off between the Bulldogs and Crimson Tide is set for 9 p.m. on SEC Network from Coleman Coliseum in Tuscaloosa .