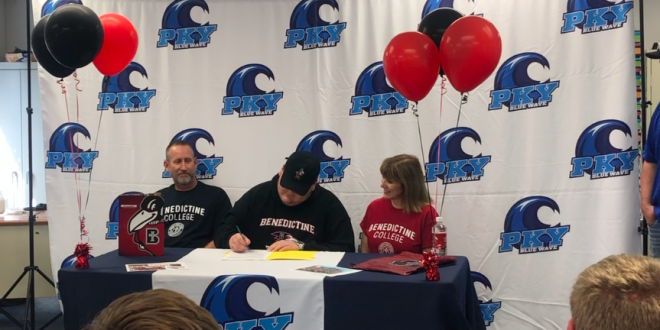 Before the signing, we heard a few words from the new football head coach, Marcus McDonald.

The room was full of many of Martin’s classmates and teammates who were supporting the athlete in this very important day. This support was recognized by both the athletic director and Martin with both of them thanking everyone for everything.

“I  want to start by thanking God for my talent, my parents and all of you guys. I’ve only been with you guys for a year but you guys have made me feel like family. Whether it be playing with you guys, or helping me in the classroom, or you guys coming to my games. I appreciate all of you guys and thank you for being my family” he said right after signing his contract.

“It has been really good having you this year. Thank you for everything, we hope that other athletes follow your lead. We wish you the best of luck and can’t wait to hear about all of your adventures.”

Kris Martin was part of Newberry High School from 2016-2018 and then moved to the PK Yonge for his senior year and became part of the football program. He explained in the signing that even though he had been there a short time, he still feels like his team was his family.

We caught up with the signee right after to ask about why he chose Benedictine and his expectations.

Camila is a senior at the University of Florida, who served as a beat writer for the women's basketball team from 2019 until the 2021 season. She was also a beat writer for the Gators football team during the 2020 season. Camila is also WUFT's news director as well as a sports reporter/anchor.
@CamilaMaffuz
Previous Bulldogs and Crimson Tide set to do battle in Tuscaloosa
Next Miami Heat Looking to Turn Season Around