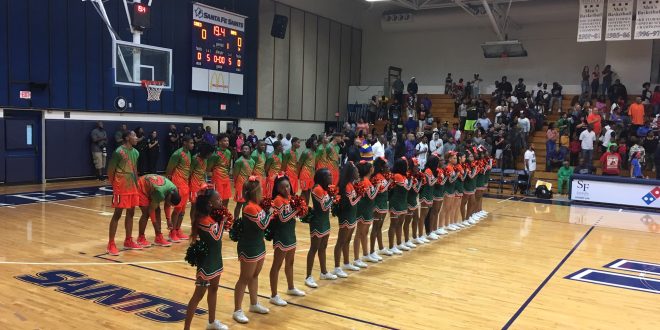 Rams beat rival Hurricanes in a close one, 50-47

The Eastside Rams matched up against their rival school Gainesville Hurricanes Friday. It was a tight contest throughout. The game resulted in a three-point win for the Rams, 50-47.

This game was played at Santa Fe College Gymnasium and it was a packed house as fans from both schools came out to support.

It was a tight game for all four quarters. Both teams trading blows as the margin for each team never went above four. But in the last 14 seconds, Eastside senior captain point guard James Pope hit two clutch free throws to put the Rams up three.

The Hurricanes called a timeout to draw up a play. The point guard tried to take it to the basket for an and-one opportunity, but the Rams were smart not to foul. The ball didn’t go in as he missed the layup and then it turned into a frenzy. Hurricanes grabbing rebounds and jacking up threes until the time expired and Rams were able to pull it off, beating their rivals.

Junior captain Anthony Richardson was a big contributor throughout the game. His high motor and energy is what got him this impressive stat line.

Junior guard Korin Bradley always brings his energy and no fear in any situation throughout the game. He averages 15 PPG this season. Bradley received player of the game honors for his performance.

Korin Bradley gets a 3 to go as @Eastsidehsrams takes back the lead 31-30 in the 3rd Quarter@ESPNGainesville pic.twitter.com/BG2rVBVtPZ

Coach “Pop” Williams was coming off of his 500th win. He wasn’t happy with his team’s performance in their last regular season game though.