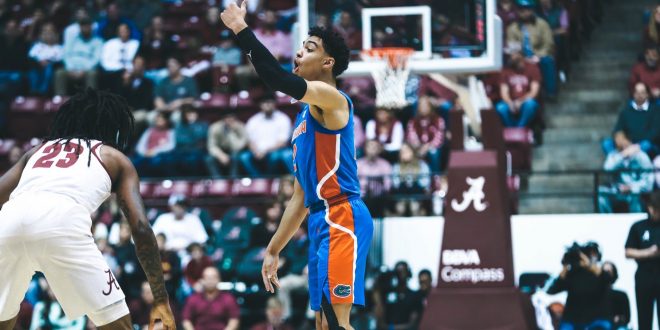 The Florida Gators picked up a huge win on the road against the Alabama Crimson Tide on Saturday by a score of 71-53.

Nembhard and Johnson Lead the Way

Andrew Nembhard had his best performances of the season today. He started the game off hot, and was the only player to score in the first four minutes of the game. He had a perfect first half from the floor, scoring 11 on 5-5 shooting in the opening 20 minutes. The 6-5 freshman didn’t cool down in the second half either. He went 4-4 in the second half, and ended up with a career-high 21 points on a perfect shooting performance.

Nembhard is only averaging 7.3 points per game this season, but this marked his third double-digit scoring performance in the last six games. If he can continue to score the ball more effectively, Florida’s offense will open up and create more opportunities for their scorers.

Nembhard was the star of the night, but fellow freshman Keyontae Johnson had himself a fantastic game as well. He had a huge double-double with 14 points and a career-high 13 rebounds. He shot 5-9 from the field and 2-4 from beyond the arc. Over the last two games, he’s averaging 14.5 points and 11 rebounds per game. Johnson seems to have a knack for grabbing offensive rebounds and giving Florida opportunities for second-chance points.

The story of this season for Florida has been offensive struggles. At last, the Gators had an efficient day on the offensive end. They scored 71 points on 54% shooting, which is the highest field goal percentage the team has had in any SEC game this year. The threes weren’t falling at a very high rate, but the Gators were able to score inside. They had 36 points in the paint, and shot 13-15 on layup attempts. They only had 9 turnovers, and had 11 assists. The Gators shot 78.6% from the line, almost 9% better than their season average. Florida moved the ball well, and the offense saw more off-ball movement today that led to easier looks for the team.

Don’t Forget About the Defense

Much of this season has revolved around the Gators’ offensive shortcomings. Lost in all of the focus on the team’s offensive is the fact that Florida has had close to an elite defense this year. According to KenPom.com, the Gators are 10th in adjusted defensive efficiency. Florida held the Crimson Tide to just 53 points. Alabama shot just 26% from three in the game and only had three players score more than five points.

Mike White has been preaching the mentality of “making winning plays.” No matter who’s on the court for Florida, they need to make positive plays. It’s a team-first mentality that the players have really accepted. The team made the plays they needed to today. They out-rebounded Alabama 31-23, including five offensive rebounds. When Alabama started to make a run and cut the lead to single digits, the Gators responded with a 13-7 run down the stretch to close the game.

The Gators are building momentum and have now won two straight games. Next up for the team is a huge road test against the 19th ranked LSU Tigers. If the Gators can capture a win, they will potentially position themselves for an NCAA tournament birth. The Gators will take on the Tigers on Wednesday night at 7:00 p.m.