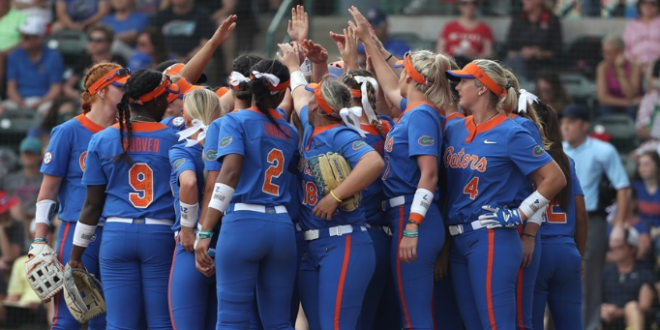 Florida didn’t waste any time continuing its dominant start to the season in its first game since the Littlewood Classic.

The No. 3 Florida Gators (12-0) earned a 5-0 shutout road win over the Jacksonville Dolphins Wednesday night. It was their fourth on the season so far.

UF is currently one of five different Top 10 teams with an undefeated record heading into the Bubly Invitational in Gainesville.

In a game delayed by clouds and rain, it was Natalie Lugo’s time to shine.

Lugo threw the second complete-game shutout of her young career against Jacksonville to move to 4-0 on the season. She even set a new career high in strikeouts with 13.

That new career mark surpasses her previous high of 11 that she set against Hampton in March 2018.

The California native wrung up at least two Dolphins batters in each of the six innings following the bottom of the first.

Eight different Jacksonville hitters found themselves heading back to the dugout via strikeout.

Furthermore, different ones struck out multiple times and the same number went down looking.

B4 | Another pair of Ks for @natalieglugo in the clean frame ups her total to seven for the game!! #Gators lead 5-0

Amanda Lorenz helped the Gators take the lead in the first with a leadoff home run. The Gators would load the bases in the top of the second and utilize it to extend the lead 5-0.

But, the bats went quiet after that. Lorenz was the only Gator hitter to record multiple hits with a 2-for-5 performance.

Seven of the 12 runners Florida left on base came after its four-run second inning. This includes a fruitless bases-loaded situation in the fourth.

Danielle Romanello hit into a pop fly with two outs and the bases juiced in that inning.

T6 | Gators threaten to score in the frame but Jacksonville manages to get out of the inning. Florida leads 5-0 over the Dolphins

Despite Lorenz having the only multi-hit game, Florida’s players still reached base. They set a season high with seven walks in the game. Jordan Matthews led the way with three walks in her five at-bats.

She finished 1-for-2 with two RBIs and a run scored.

Florida is back at Katie Seashole Pressly Stadium this weekend for the Bubly Invitational. The first game is against Illinois State at 5 p.m.