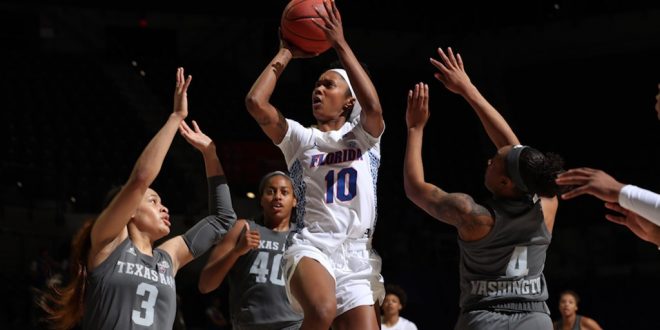 Despite 13 Triples as a Team, Florida Women’s Basketball Falls to Texas A&M 80-62

The Florida women’s basketball team drops to 6-21 on the season after an 80-62 loss against Texas A&M on Monday.  The Aggies shot 56.3 percent from the field against the Gators, and had three players score 21 points or more. UF didn’t have a great night shooting, but they knocked down 13 three-pointers as a team.

Gator coach Cameron Newbauer talked to reporters after the game about how his team dealt with adversity against the No. 21-ranked Aggies.

The Aggies opened up the floodgates immediately and showed why they are one of the top 25 teams in the nation.  Behind contributions from five different scorers, Texas A&M got up 15-6 on Florida in the first five minutes. The defense was amplified for the Gators as the quarter progressed, but UF ended up trailing 20-9 after the first quarter.

Overall, the Aggies shot an efficient 72.7 percent from the field and knocked down three out of their four free throws. Florida, on the other hand, only made 3 of their 17 shot attempts, all of them from behind the arc.

The Gator offense continued to struggle over the next 10 minutes of game time. UF made just 23.1 percent of their shot attempts, but were able to connect on a couple of triples.  Texas A&M hit seven shots in the period, including a couple of three-pointers. Even though Florida trailed by as many 24 points, they cut the Aggies’ lead to 19 points heading into halftime.

Fighting to the finish

Newbauer’s group erupted in the third period for one of their best quarters of the season.

In the 10 minutes of game action following halftime, Florida shot an incredible 68.8 percent from the field. Led by Fundu Nakkasoglu’s 13 points, the Gators made a staggering 83.3 percent of their three-point attempts.

Nakkasoglu talked about her performance in the third quarter, where Florida outscored Texas A&M 28-23.

Unfortunately for the Gators, the team struggled to keep up their efficiency in the fourth quarter. UF shot 26.7 percent from the field and were outrebounded 14-6. A couple of positive notes for the team were that they shot 42.9 percent from behind the arc in the quarter and made all six of their free throw attempts.

Overall, Danielle Rainey, who chipped in 17 points, was proud of how her team bounced back in the second half.

What’s next for UF?

Florida has just two games left before they begin the SEC Tournament next week.  First up, the Gators will take on Georgia this Thursday at the O’Connell Center. For their final game of the season, UF will travel to Nashville to face off against Vanderbilt.

The status of Delicia Washington, who was not on Florida’s bench on Monday, is still up in the air. Newbauer described her situation as “a team matter.”  There is speculation she has quit the team but that has not been confirmed with any team member or person involved with the program.