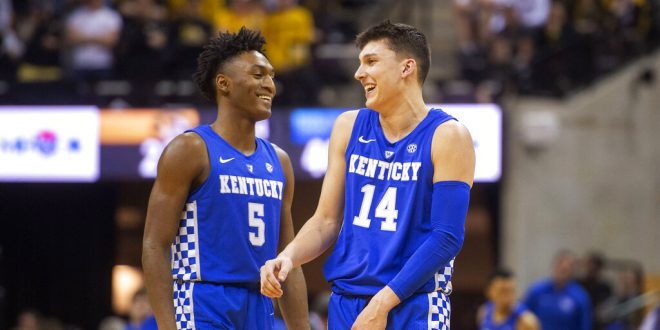 The Razorbacks are in a bit of a slump right now. Meanwhile, Kentucky is on a roll, ranked 4th nationally. Arkansas will have to fight hard tonight to escape another loss.

The Big Blue is on Fire

Just one focus today: beat Arkansas. Nothing else matters.

Kentucky basketball has one focus for their game against Arkansas tonight. That is to win. It’s this mentality that has brought them up the ranks to be the 4th best team in the country right now. Coming off of consecutive wins against Auburn (80-53), Missouri (66-58), and Tennessee (86-69), they are on a hot streak.

Defeating Tennessee when they were the #1 ranked team in the country by 17 points let the SEC and NCAA know that they are not messing around this season. Sophomore PJ Washington has lead the Wildcats through their success, averaging 15.2 points per game and 7.9 rebounds a game. His consistency combined with their defense’s tenacity makes for a team that will be hard to beat in the coming weeks leading up to the post-season.

Arkansas Slipping Through the Cracks

February has not been the Razorback’s month. Losing their last five games in a row against teams without a ranking is hard to bounce back from. This game will be difficult for them to win, as the ESPN Power Index only gave them a 4.4% chance of beating the Wildcats. The odds are not in Arkansas’ favor, but they still have a little hope.

Sophomore forward Daniel Gafford leads the team with an average of 16.6 points per game and 8.9 rebounds, which are commendable stats. Arkansas will need a lot of heart and intensity to not be crushed by the fans in Rupp Arena and Kentucky’s dominant squad.

Watch the Kentucky Wildcats host the Arkansas Razorbacks in Lexington at 9 p.m. on Feb. 26. Game will be broadcast on the SEC Network.

3rd-year Telecommunications student at the University of Florida. Also a member of the Women's Track and Field team.
Previous Despite 13 Triples as a Team, Florida Women’s Basketball Falls to Texas A&M 80-62
Next Boys High School Regional Semifinals Action