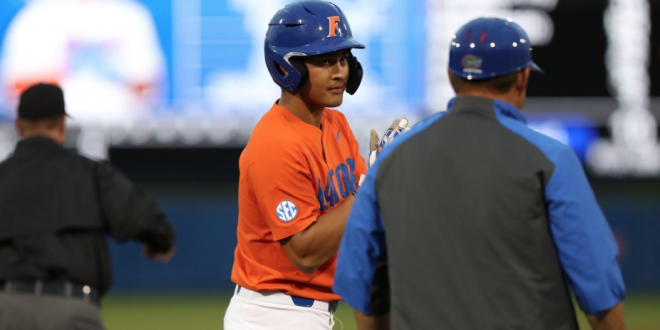 The Florida Gator’s baseball team’s weekend series against the Winthrop Eagles will be about regaining momentum.

Had it not been for a 12-9 loss to UCF in the midweek, Florida (6-4) would’ve entered Friday’s game with four consecutive victories. However, the Knights bats’ racked up 14 hits on five different Gator pitchers. Florida also made four errors in that game as UCF came from behind on the road on a pair of occasions.

Friday will be the Eagles’ second game this season against an SEC opponent. Their first was a 8-6 loss to South Carolina in Columbia, SC.

First pitch on Friday is set for 6:30 p.m. The latter two games will be played at 4 p.m. and 1 p.m. respectively from McKethan Stadium.

Gators’ offense looks to remain in a groove

There was a time last week when the Gators were in the midst of an offensive drought to some extent.

Gator hitters had been held to four runs in their three losses to USF, North Florida and Miami from Feb. 19-22. They were then still searching for their first run of the game until the sixth inning of Game 2 versus the Hurricanes.

Since then, 27 Gators have crossed home plate in a stretch of less than four games. That’s good offensive baseball.

Some of Florida’s hitters, including their young nucleus of freshmen, have either continued their hot starts to the season or turned a corner at the dish.

Shortstop Brady McConnell is still slashing .342/.432/.421 to start the season as he and outfielder Austin Langworthy lead Florida in runs scored (7).

Meanwhile, freshman infielder Cory Acton has provided a sudden spark. Having started the season 2-for-18 at the plate, he’s now in the middle of a 6-for-12 stretch to raise his batting average to .267.

Florida’s offense will face a left hander in Thad Harris (0-0, 3.00 ERA) on Friday. Junior Tyler Dyson heads to the hill for Florida. Dyson is yet to go more than four innings in his two starts but has held opponents to two runs on both occasions.

Sophomores Tommy Mace (2-0, 3.21 ERA) and Jack Leftwich (2-0, 1.64 ERA) have been an impressive tandem for the Gators in their first 10 games. They’ll both be given their starting nods, starting with Mace on Saturday.

The 6-foot-6-inch right-hander has battled through adversity in both his starts this season to pick up important wins. Mase has allowed 22 runners to reach bases in his 14 innings of work (1.214 WHIP). Despite that, he’s come up with some great pitches to get him out of some crucial jams.

Last time out, his seven innings of three-run ball were good enough to earn him the win against Miami. The Eagles will send junior Zach Peek (1-0, 1.50 ERA) to the mound in Game 2 of the series. Senior ace Nate Pawelczyk (2-0, 1.50 ERA) will start Game 3 against Leftwich.

As for Leftwich, he was excellent in the rubber match of last weekend’s series against Miami. He managed to induce seven strikeouts in five innings against Miami. He’s given up just one run in both his starts this season.

Friday’s game against Winthrop will be Game 2 of a 14-game homestand for Florida. That’s the longest stretch of games they’ve been scheduled to play at home since 2005 (19 games).

Sports media and management student at the University of Florida. Content creator for ESPN 98.1 FM/ 850 AM WRUF.
@TheEdgarChavero
Previous Gators Gymnastics Hopes to Clinch a Share of the SEC Title with a Win Tonight
Next McVay Talks post-Super Bowl at NFL Combine 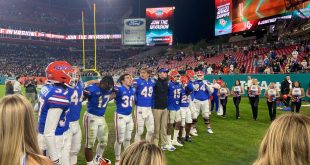