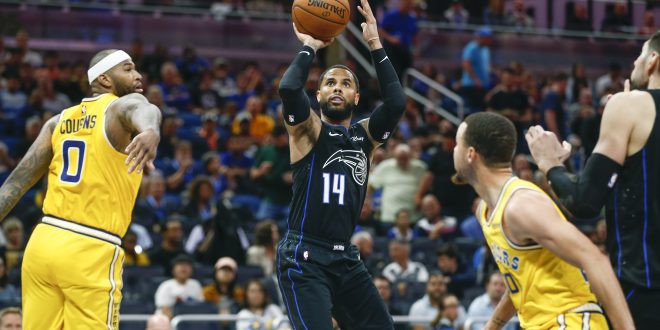 Magic Rally to Beat the Warriors, Continue on Path to Playoffs.

The Orlando Magic bounced back from a disappointing loss against the New York Knicks by trouncing the Golden State Warriors 103-96.

Orlando came from behind to break a double-digit deficit against the Warriors in the fourth quarter.

According to Warriors PR, the 96 point loss broke a 33-game streak of the team scoring at least 100 points.

On top, Aaron Gordon led the Magic to break an 11-game losing streak against the Warriors, scoring 22 points and 15 rebounds. The win moved the Magic into a tie with the Charlotte Hornets for the eighth and last Eastern Conference playoff spot.

Passing in the First

The Magic broke out strong, keeping their passing up and running the floor. Orlando coach Steve Clifford attributed the ball movement to the pressure on the Warrior’s defense.

“It’s their cutting baskets, it’s their pace of play, it’s their ball movement” Clifford said. “To me it’s their passing, when you have that many guys that can both pass and shoot, it puts enourmous pressure on your defence.”

One of the ingredients that led to Orlando’s loss to New York Last week was the lack of passing. The team showed a sense of growth on Thursday night by sharing the basketball. In total, the team put up 12 assists on their first 15 baskets.

Gordon flexed his ability in the air by slamming down a monster dunk after running the floor against a seemingly-lost Warrior defense.

Curry began heating up at about halfway in the first quarter. The former NBA MVP scored 15 consecutive points to close out the game’s first period, leaving the score 28-22 Orlando.

The Warriors began to show more signs of life in the second quarter but only shot with 39 percent accuracy. Klay Thompson brought the heat in the first half, scoring 12 points in the second. It wasn’t enough to deter Gordon though. Gordon’s jump-shot beat the buzzer to bring the Magic up 59-51 against the Warriors at the half.

The Magic showed great balance throughout the first half, with six players having five points or more.

The third period was a difficult one for the Magic. Coming out of the lockers seemed to bring the Warriors a second wind, running a 25-7 lead on Orlando. The Magic saw four turnovers and only shot 5-23 throughout the quarter. The Warriors were led by DeMarcus Cousins on their comeback, who scored 16 of their 30 points.

Going into the fourth, the Magic trailed by 11 points, determined to come back stronger.

Comeback in the Clutch

The Magic broke out of the fourth with a 14-6 run, which called for Warriors coach Steve Kerr to call a timeout.

A decisive Terrence Ross 3-pointer tied the game 89-89 with less than five minutes remaining. The two teams traded points back and forth throughout the winding minutes, the game in anyone’s hands. A destructive three from Curry sprung a timeout from Clifford with the Magic down by five with just three minutes on the clock. Gordon sealed the tie with a three-point shot with the help of Nikola Vucevic, which was followed by the game-winning layup from Augustin.

The Magic outscored the Warriors 35-12, an uncharacteristic sight from the former champions. Clifford was cited in the Orlando Pinstriped Post as recalling the pressure of being down by 11 points and what it took to come back on top.

“(Down) eleven at home, that’s not where you want to be (against them), but certainly it’s not the end of the world,” Clifford told reporters. “We had to play a good three or four minutes, and that’s what we did. “

The Magic now take on the Pacers Saturday night in Indiana. The victory over Golden State shows the fighting spirit that may make Orlando a true playoff team come April.