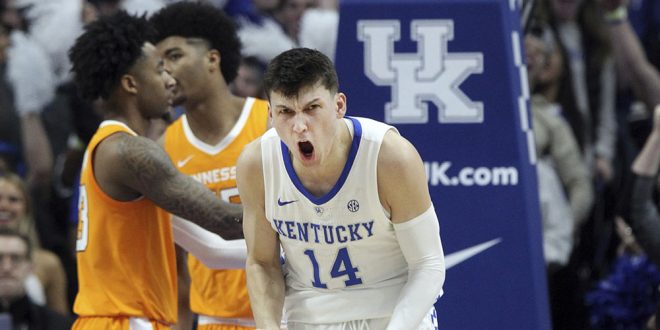 Kentucky's Tyler Herro (14) reacts to a play during the second half of the team's NCAA college basketball game against Tennessee in Lexington, Ky., Saturday, Feb. 16, 2019. Kentucky won 86-69. (AP Photo/James Crisp)

This Saturday is for SEC basketball with seven matches, this weekend. The fun kicks off at noon with the last game starting at 8:30 p.m.

Games to watch Saturday are Kentucky vs. Tennessee as the Vols are looking for redemption against the Wildcats. In addition, the Florida Gators are on a five-game winning streak after a rough stretch of play.

March is here, and we're kind of excited about it. pic.twitter.com/zuKWLn1EJW

The Wildcats have won four in a row, most recently Arkansas, 70-66. Kentucky point leader was freshman guard Tyler Herro with 29 points.

The Vols have been on a rollercoaster, losing and winning the last four games. Most recently, they barely beat Ole Miss, 73-71, on Wednesday. Junior forward Grant Williams was the point leader that game with 21 points. Behind him with 17 points was junior guard Lamonte Turner.

The last time these teams met was only a few weeks ago on Feb. 16, and Kentucky beat Tennessee, 86-69.

Catch the game of the weekend at 2 p.m. on CBS.

The Florida Gators are on fire after winning five in a row, most recently defeating Vanderbilt, 71-55, on Wednesday. The game’s leading scorer for the Gators was freshman guard Andrew Nembhard with 19 points. Behind him was senior guard Jalen Hudson with 17 points.

With nine losses in a row, and a recent loss to Auburn, 78-75, the Bulldogs are hungry for a win. That game’s leading scorer for Georgia was junior guard Jordan Harris with 18 points. Sophomore forward Nicolas Claxton was not too far behind with 14 points against Auburn.

LSU is coming off their 66-55, win against Texas A&M on Tuesday. The leading scorer for the game was freshman forward Naz Reid with 18 points. Right behind him was guard freshman Ja’vonte Smart with 17 points.

Alabama also got a win on Tuesday night where they barely beat South Carolina, 68-62. Freshman guard Kira Lewis Jr. was the points leader for the Crimson Tide with 17 points. Senior forward Donta Hall trailed Lewis Jr. with 15 points against the Gamecocks.

Catch the game at noon on ESPN.

A never before seen view of the @TerenceDavisJr dunk that went viral last night courtesy of @OleMissVideo.

Ole Miss came close to beating Tennesee on Wednesday, but could not get there when they fell to the Volunteers, 73-71. Leaders for the Rebels included senior guard Terence Davis and junior guard Breein Tyree with 16 points.

On the other hand, Arkansas has lost six games in a row, recently losing to Kentucky, 70-66, on Tuesday. Leading in points for the Razorbacks was freshman guard Isaiah Joe with 19 points. Behind him was freshman guard Desi Sills with 15 points.

Catch the game at 1 p.m. on the SEC Network.

The Gamecocks are coming off a loss against Alabama, 68-62, on Tuesday. Leader for South Carolina was senior forward Chris Silva with a total of 23 points. That’s almost half of the second leader senior guard Hassani Gravett, who scored a total of 12 points.

Meanwhile, the Tigers are on a four-game losing streak, most recently losing to Mississippi State, 68-49, on Tuesday. The points leader for the Tigers, freshman guard Torrence Watson, barely made it into the double digits with 12 points that game. Right behind him with 11 points was sophomore forward Jeremiah Tilmon.

South Carolina and Missouri are currently tied for the all-time record, 5-5.

The future is now. This is our window.#WarEagle x #UnfinishedBusiness pic.twitter.com/EuiAe295RE

Mississippi State is on a roll, winning their last five games. They recently beat Missouri, 68-49, on Tuesday. Junior guard Tyson Carter led the team with 22 points, and right behind him was senior guard Quinndary Weatherspoon with 20 points.

Auburn beat Georgia, 78-75, on Wednesday.  A lot of the credit goes to guard junior Jared Harper for scoring 22 points against the Bulldogs.

Both teams are looking for a win after Vanderbilt fell to Florida on Wednesday, 71-55, and Texas A&M lost to LSU, 66-55.

This will be the first time these teams see each this season.

Catch the game at 6 p.m. on the SEC Network.

I am a fifth-year journalism major, specializing in sports and media. My favorite sport to watch and cover are college and NFL football. When I'm not doing that, I enjoy hanging out with my cat, going to concerts and traveling.
@sportsabrina
Previous Magic Rally to Beat the Warriors, Continue on Path to Playoffs.
Next Gators Gymnastics Hopes to Clinch a Share of the SEC Title with a Win Tonight 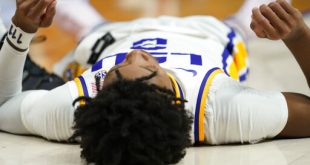