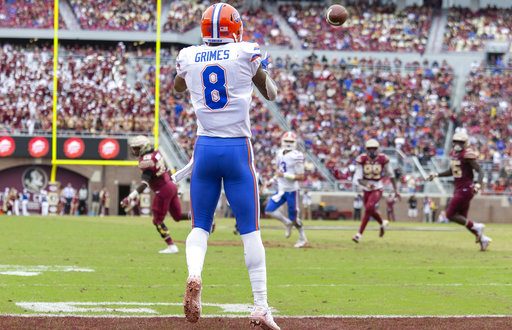 Head coach Dan Mullen turned around the program from a subpar four-win season to an impressive 10-win season. Now, fans are eager to see what Mullen and the team will bring to the field as they begin Spring Ball. For the wide receiver position, there is a lot of talent on the roster and arguably the best in about a decade.

Breakdown of the Receivers

Starters Hammond, Jefferson and Cleveland will all return. Jefferson decided to return for his final season. The Tennessee-native played in and started all 13 games last season. Furthermore, the redshirt senior led Florida in receptions (35), receiving yards (503), receiving touchdowns (six).

Meanwhile, Cleveland will possibly be limited this spring after suffering a broken collarbone during the Florida State game last season.

The senior from Texas was also a gunner for Florida’s punt team, recording five tackles. Despite not having a healthy Cleveland, there is still a lot of depth. In particular, Grimes finished third on the team with 26 receptions. The Ohio State transfer recorded his first 100-yard receiving game against Florida State when caught five passes for 118 yards.

Fans will get the chance to see the Gators play in the Orange and Blue game on Saturday, April 13 at 1 p.m.

@sophialafrance
Previous Gator Football Positional Preview: Defensive Backs
Next What To Expect From the Gators’ D-Line