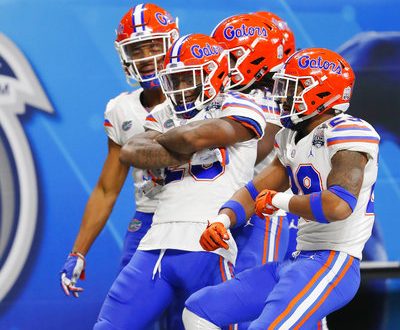 As a self-proclaimed DBU (defensive back university) Florida football heavily relies on their defensive backs to dictate the course of a game. While they are losing some great men, Gator football is still committed to having a strong secondary squad.

The 2018 football season showed significant improvement for Florida football. A breakout star, Chauncey Gardner-Johnson had a fantastic season. He was named Defensive MVP at the Peach Bowl, had 13 interceptions, three interceptions converted into touchdowns, and 161 total tackles. His departure from the team will leave a significant hole, but Dan Mullen and his staff have been hard at work preparing the returning DBs for the fall.

Returners Have To Step Up

Since Florida is only losing one DB, this position is not lacking in numbers. Cornerback CJ Henderson will be entering his junior season as one of the top corners in FBS. Trey Dean III will definitely be one to watch, as he is entering his sophomore season. Dean is expected to take over the role that Gardner-Johnson had on the defensive line. We should expect to see a continuance in this trend of defensive dominance. Especially since defensive coordinator Todd Grantham decided to stay at Florida for at least another season, his influence on the program is key. At the spring football press conference, Dan Mullen was sure to emphasize that now is the time for second-year players to step up to the plate.

3rd-year Telecommunications student at the University of Florida. Also a member of the Women's Track and Field team.
Previous A peek at Florida’s 2019 RB Situation
Next Gator Football Positional Preview: Wide Receiver