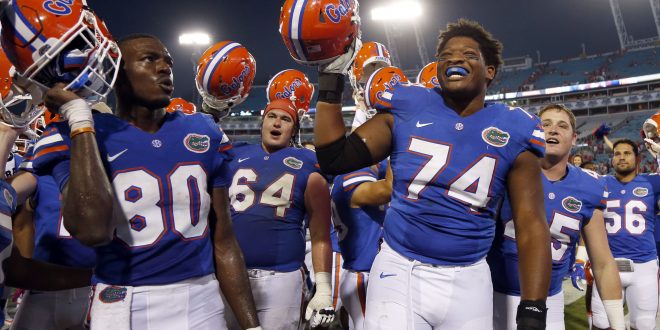 Florida football’s wide receiver corps may garner a lot of praise, but Coach Dan Mullen loves to use a tight end when he can. However, with just three returners and one recruit at the position, Mullen says the Gators might have a bit of an uphill battle.

Last season, Lewis, Stephens, and Raymond combined for 16 catches and 270 yards last season. Comparatively, Krull, Pitts, and Gamble combined for 25 catches and 206 yards. Lang played in just two games and did not record any receptions.

Year two for Mullen is essentially year two for this TE group, as well. Only Gamble, who is entering his redshirt junior season, has more than one season of experience in the Swamp. Krull, who caught 15 passes in 2018, was a JuCo transfer and Pitts, who caught 3 passes for 78 yards, was a true freshman. In a press conference, Mullen noted how a lack of reps could affect the position next season.

Considering the fact this upcoming group took a bit of a backseat to Lewis and Stephens in particular last season, it will be exciting to see what the players learned.

In With the New

Mullen did not divulge too much when asked about who he is looking at as far as starters. However, look for all four returners to make a splash as early as the first Spring practice.

Because the 2019 season will be Krull’s last, he probably has the most to play for in terms of forging a career for himself. It is also worth mentioning that Pitts, a former four-star recruit, lines up with the WRs from time to time. However, it is unclear if he will stick with TE, move to wide receiver, or play a bit of double-duty for the Gators.

Gamble, the most experienced member at the position, played in all 13 games and did a solid job in doing so. Spring ball will definitely make an impact on the rising redshirt junior’s playing time. Redshirt freshman Lang will most likely play a reserve role during the season, barring a spectacular training season.

Florida signed Keon Zipperer, the 102nd ranked player in the country, on Early National Signing Day. Zipperer will not be on campus until the Summer, which could affect how much he plays in the Fall. However, the four-star recruit is not to be counted out in this race either.