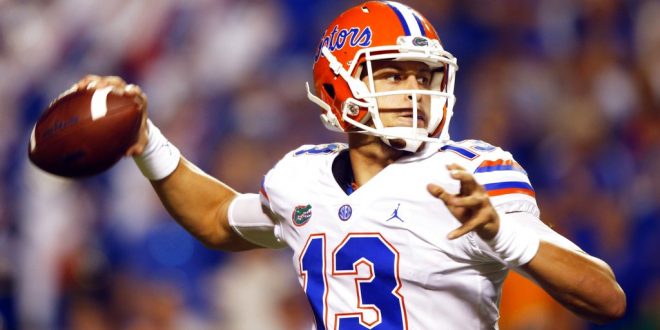 As the 2019 football season rapidly approaches, the quarterback competition continues to heat up. With players graduating and new players coming in, the quarterback competition is up for grabs. Although Feleipe Franks would be the suspected starter, head coach Dan Mullen says he does not have a starter set and expects everyone to continue to fight.

Franks started at quarterback for all 13 games last season. By starting in every game, this makes Franks the first quarterback at Florida to start in every game since Tim Tebow in 2008. He finished the season throwing for 2,457 yards with 24 touchdowns and six interceptions. When Franks committed to Florida, he was the first four-star passer since Grier. Coach Mullen says the key for Feleipe this season is making quicker decisions.

Although Franks did win the 2018 quarterback competition, this decision did not come without criticism. Fans believed that Trask outplayed Franks in the Orange and Blue game and should have won the starting position. However, Franks was named the starting quarterback and continued to have a decently solid first season under Mullen.

Kyle Trask appeared in four games as the backup quarterback during the 2018 season. His most notable game being that against Missouri where he threw for 126 yards and a touchdown.  After this performance, many fans asked for Franks to be replaced with Trask for the remainder of the season. However, Trask would suffer a season-ending injury in practice the following Thursday.

In the other three games that Trask appeared in, he only threw for 36 total yards.

Emory Jones has been with Mullen since his Mississippi State days. Mississippi State was the first SEC school to offer him a scholarship, and when Mullen moved to Florida, Jones came along with him. Last season Jones saw action in just four games, earning him a redshirt.

His most significant playing time came during the games against Charleston Southern and Idaho. During his four games, Jones completed 75 percent for 125 yards with two touchdowns and no interceptions. However, playing quarterback isn’t the only position that Jones excels at. He also recorded 41 yards on 18 carries last season.

A new Jones will be added to the quarterback lineup this season. Jalon Jones was another player who had ties to Mullen at Mississippi State. By April 2018, Jones had recommitted to the Gators. He began as a three-star passer but has since risen to a four star.

With the upcoming quarterback competition, it is a good thing that the younger Jones is used to competition. Jones’ father was a captain on the Buffs’ 1990 national championship team. His mother competed in the high jump at the 1992 Summer Olympics in Barcelona, and his sister, Jocelyn Jones, is a basketball player at the University of North Carolina.

Although Franks is the likely starter due to his experience, the quarterback competition is still very much alive until Mullen names a QB1. Trask would also bring experience to the position and the older Jones would be the speediest option at quarterback. The younger Jones will also be a contender with his raw talent.