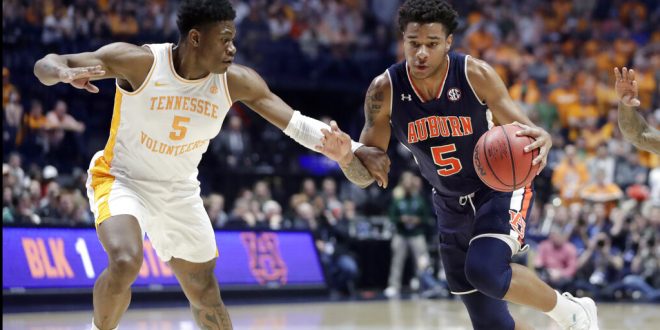 The madness has officially arrived and the SEC has multiple teams in the big dance. The SEC placed seven teams in this year’s NCAA Tournament, the second most out of any conference, tied with the ACC and one team behind the Big Ten, which placed eight.

These two teams get the unfortunate draw of being in the same region as the top overall seed, Duke, but each has a solid shot of at least reaching the Sweet 16.

LSU sits at 26-6 so far after falling to Florida in the quarterfinals of the SEC Tournament. Head coach Will Wade remains suspended, but the team did get back Javonte Smart for postseason play. Interim head coach Tony Benford said Smart has been cleared to play in the NCAA Tournament, so he’ll be in the lineup when the Tigers take on 14-seed Yale, who are coming off winning the Ivy League tournament.

Mississippi State also enters following a loss the quarterfinals of the SEC Tournament. The loss to Tennessee gave the Bulldogs their tenth loss of the season, dropping them to 23-10. They are set to take on 12-seed Saint Louis, who went on a run to win the A-10 conference tournament, defeating St. Bonaventure in the final.

The Vols got smoked by Auburn in the SEC Tournament final, but still look poised to make a deep run. Tennessee remained in the top-10 all year, and earned a 2-seed from the selection committee, on the opposite side of the region as 1-seed Virginia. Rick Barnes’ squad is a veteran-led team, which is usually a characteristic of teams that go far, with Grant Williams and Admiral Schofield. They face 15-Colgate in the first round, a team that comes in after winning the Patriot League tournament.

The Rebels meanwhile are in the matchup that’s always a toss-up, the 8 vs. 9 game, against 9-seed Oklahoma. Ole Miss doesn’t have a lot of momentum coming in though, as they had an early exit in the SEC Tournament against Alabama in the second round and have lost five out of their past seven games.

The Rebels are headed to Columbia with these four teams in this quadrant of the bracket!#HottyToddy #MarchMadness pic.twitter.com/rzM4BAtI9J

Mike White’s team sweated out Selection Sunday. They were one of the last three teams announced, but eventually were slotted against 7-seed Nevada in the West region, where Gonzaga is the top overall seed.

Florida’s run in the SEC Tournament to the semifinals helped the Gators go from firmly on the bubble to pretty confident they’d make the tournament come Selection Sunday.

It’s the third straight year Mike White has led Florida to the NCAA Tournament, with his previous trips ending in the Elite Eight and Round of 32. Should Florida make it past a tough Nevada team, it would play the winner of Michigan-Montana for a spot in the Sweet Sixteen.

Kentucky joins Tennessee as the two highest-seed teams from the SEC, with each picking up a 2-seed. The Wildcats closed the regular season strong but fell in an intense SEC Tournament semifinal matchup against Tennessee.

John Calipari is hoping his squad makes it further than last year’s stint that ended in the Sweet Sixteen against Kansas State and they’re in good shape to do that. Reid Travis and PJ Washington is a tough combo to stop, and should Kentucky beat 15-seed Abilene Christian in the first round, they would play Wofford or Seton Hall for a spot in the Sweet Sixteen.

Meanwhile, the Tigers enter as one of the hottest teams in the country after winning the SEC Tournament. They escaped past Florida in the semis before putting a beat down on Tennessee in the final.

Auburn showed it’s knack for raining three’s, and that ability from downtown makes them dangerous. They play 12-seed New Mexico State in the first round, with an intriguing possible matchup against Kansas awaiting in the round of 32.

Native New Englander. Follow me on Twitter: @jonacosta_10
@jonacosta_10
Previous Gators to Host Auburn for 2019 Homecoming
Next Nevada gets set to take on Florida in first round of the NCAA Tournament