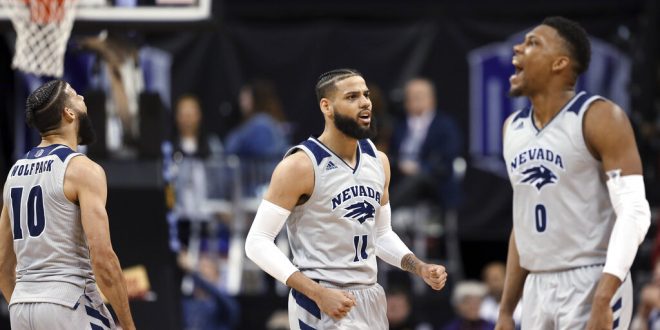 The Nevada Wolf Pack enter the NCAA Tournament as the No. 7 seed in the West where they’ll take on the No. 10 seed Florida Gators.

Head coach Eric Musselman will look to lean on the experience of his team. The Wolf Pack boast a starting lineup that features five seniors as the group gears up for one last tournament run.

Nevada is led by the Martin twins, Caleb and Casey, as well as Jordan Caroline. It was this core group that led the Wolf Pack to the Sweet 16 last season where their season ended short with a one-point loss to Loyola Chicago.

John Ramey, the lead broadcaster for Nevada’s football and basketball program, goes into what makes this year’s team different from the last.

The Hunt continues on Thursday at 3:50pm PST on TNT!#BattleBorn // #MarchMadness pic.twitter.com/m6fVEuZP1m

As the Wolf Pack enter the tournament, Musselman will use the same minute’s mentality he’s been using the last two years. Barring any foul trouble, expect Nevada to stick with their seven or eight-man rotation.

How They Match Up

As the Gators are undersized compared to the Wolf Pack, Florida will look to the play of its guards. The Martin twins will have their hands full going up against a trio of Florida guards. Seniors KeVaughn Allen and Jalen Hudson have been exceptional down the stretch as they continue to mesh well with freshman Andrew Nembhard.

Mike White and his Gators will need to limit their mistakes in order to come out with the win. There a team that likes to live and die by the three-pointer, something that could be difficult to come by against a tough Nevada defense.

The biggest adjustment the Wolf Pack will need to make is how they handle playing an SEC team. Nevada has not gone up against opponents that would make you think they’re ready to face off against a Florida team that has played LSU, Tennessee and Kentucky.

A preseason sleeper team to make it to the Final Four, Nevada will face a tough road to get there as this super senior class makes one more run for glory.