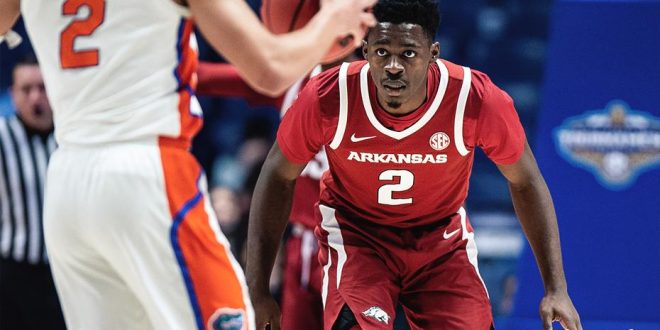 Arkansas Takes on Providence in NIT

After a 17-15 season, the Arkansas Razorbacks failed to secure a bid in the NCAA Tournament. However, they will continue their season as the No. 5 seed in the National Invitational Tournament.

They will be taking on the 4th seeded Providence Friars. The Friars finished 18-15 overall, including 7-11 in the Big East.

They are led by Daniel Gafford, who is absolutely dominant in the interior. The big man is averaging 16.9 points, 8.7 rebounds and 2.0 blocks per game. The Razorbacks also have three talented guards in Isaiah Joe, Mason Jones and Jalen Harris. Joe ranks seconds on the team in scoring with 14.0 points per game, while Jones isn’t far behind with 13.6 per game. Harris leads the team in assists with 5.5 per game.

Arkansas is elite at forcing turnovers. They rank in the top 23 in the country in forced turnover percentage, block percentage and steal percentage. The Razorbacks should give the Friars a difficult time with this defensive pressure.

Even though the Razorbacks aren’t competing in the big dance, Mike Anderson knows the NIT is still a meaningful tournament.

They are paced by Alpha Diallo, who leads the team in points (16.1 per game), rebounds (8.0 per game), assists (3.1 per game) and steals (1.5 per game). Nate Watson, A.J. Reeves and Isaiah Jackson round out a bulk of the offensive production for Providence.

The game will be played on Tuesday night at 9:00 p.m. ET. It is set to be aired on ESPN2. The winner will move on to face the winner of No. 1 Indiana vs. No. 8 St. Francis in the second round.