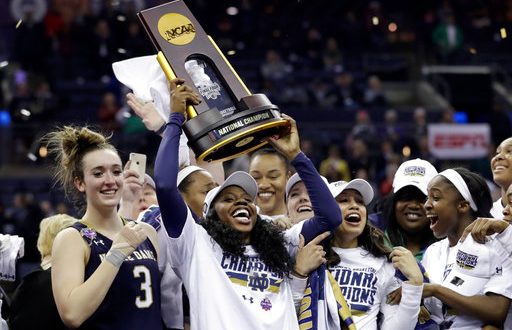 The time has come for the best women’s basketball teams in the country to face off for the NCAA title. The bracket is live and teams are gearing up to play the first round.

Tensions were high last night as women’s basketball teams all over the country watched and waited for the tournament selection program to air on ESPN. Somehow, there was a mix-up at ESPN and three of the regional brackets were mistakenly posted as a sidebar on ESPNU. They revealed some of the selections several hours earlier than expected.

While this ruined the reveal for some teams, ESPN was quick to issue a statement and air the selection special at 5 p.m. on ESPN2 so that the rest of the teams could know their placement.

A Look at the Bracket

The No. 1 seeds going into the tournament include Baylor, Notre Dame, Louisville, and Mississippi State. UConn was not chosen as a No. 1 seed for the first time in 13 years. Although they were ranked 2nd in the last AP poll and won their conference championship, the Huskies are the No. 2 seed in their region and will face No. 15 Towson for their first game.

Looking at SEC teams, the No. 11 seed Lady Volunteers have made history. Since the beginning of the tournament in 1982, Tennessee has gotten a spot every single year.  They are set to play No. 6 UCLA, a team that has won 11 of their last 14 games. The other SEC teams that made it into the tournament include South Carolina, Kentucky, Missouri, Texas A&M, and Auburn.

Last year’s tournament went as predicted; all the No. 1 seeds made it to the Final Four. This year could prove differently, as many predict UConn will knock out Louisville in the quarterfinals. Teams will really have to step up if they want a chance at playing for a title.

First Round Game Line Up

The first round of the tournament is from Mar. 22-23 all day on ESPN2. Here are some games to watch:

3rd-year Telecommunications student at the University of Florida. Also a member of the Women's Track and Field team.
Previous Heat dominate Thunder in much-needed win, 116-107
Next Arkansas Takes on Providence in NIT