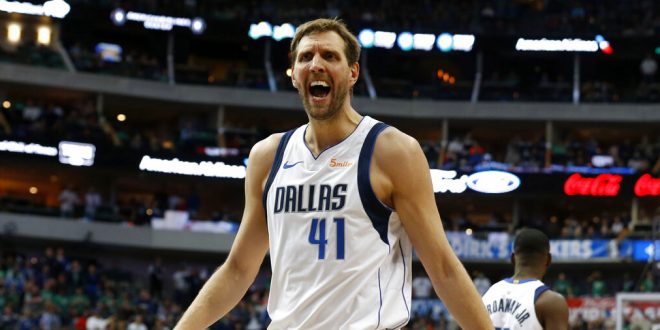 Dallas Mavericks forward Dirk Nowitzki argues a foul call during the second half of the team's NBA basketball game against the Cleveland Cavaliers in Dallas, Saturday, March 16, 2019. (AP Photo/Michael Ainsworth)

On March 18, in a matchup against the New Orleans Pelicans, Nowitzki scored eight points to pass Wilt Chamberlain to retake the 6th spot on the all-time scoring list.

This is Nowitzki’s second time reaching the 6th spot, first doing so when he passed Shaquille O’Neal on December 23, 2015. However, he lost the spot earlier this season when LeBron James passed him in scoring. James has since passed Chamberlain and Michael Jordan on the all-time scoring list.

Nowitzki said he felt good being able to surpass a legend in Chamberlain. He admitted that he wasn’t sure if he would ever pass Chamberlin given missed playing time.

Nowitzki has only played in 39 of the Mavericks 70 games this season. This is due to missing the first month of the season recovering from left ankle surgery. Add the fact he’s only started nine of those 39 games, it was understandable that he may not have had the chance to retake his spot. But, Nowitzki managed to get the 232 points needed to pass the hall of famer.

This isn’t Nowitzki’s only accomplishment this season. Along with reclaiming the 6th spot, he set a record for most seasons (21) played with a single team. He surpassed Kobe Bryant who spent his entire 20-year career with the Los Angeles Lakers. Nowitzki is also in a five-way tie for most seasons played in a career.

He was also named to his 14th all-star game representing Team Giannis, despite the missed playing time. Along with DeWayne Wade, NBA Commissioner Adam Silver selected Dirk citing contributions to the game.

Speculation has surrounded Nowitzki about if this will be his final season. Even though he’s been given the unofficial retirement tour, no official announcements have been made.

“The fans have shown me a lot of love already on the road, even though I obviously haven’t announced that this is going to be it,” Nowitzki said to the Fort Worth Star-Telegram, “I want to see how my body feels the last couple of weeks. If I get to see any improvement, if it’s still fun, and I guess we’re going to make that decision later.”

Harrison is a sports coordinator at ESPN 98.1 FM/850 AM WRUF. He served as a beat writer for Florida Gators football for the 2019 and 2020 seasons. He also contributes to WRUF's Gainesville Sports Center segments and makes appearances on the Clash on Harp on Sports. Harrison has been a content writer for WRUF since January 2019 as well.
@HarrisonSmaj
Previous Arkansas Takes on Providence in NIT
Next San Antonio Spurs continue their hot Streak Defeating The Warriors 111-105