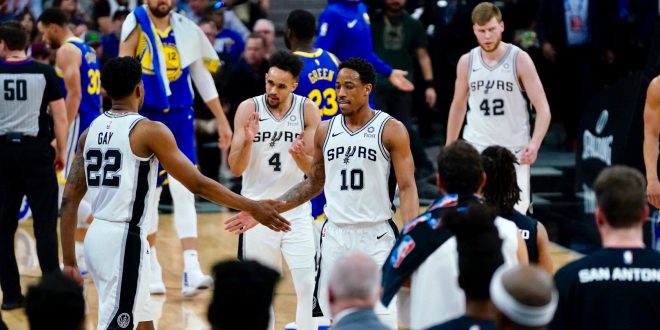 Last night the San Antonio Spurs had an outstanding performance which landed them a victory against the No.1 seed in the West, The Golden State Warriors.

With the playoffs creeping up right around the corner, the Spurs currently sit 5th in the Western Conference. This was an impressive and much-needed win for the Spurs, who are currently tied with the Oklahoma City Thunder in wins and losses for the season.

Demar DeRozan led the San Antonio Spurs to their victory against the Warriors with an amazing offensive performance. He had 26 pts, 9 rebounds, and 8 assist.

Although he led the team in points the Spurs also had five players in double-digits. Following behind DeRozan was Lamarcus Aldridge rallying in 23 points and 13 rebounds. 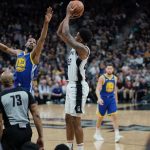 The Spurs played well on both ends of the court, especially the defensive side limiting their turnovers against the Warriors.

This win marked their 11th consecutive victory at their home arena and their 9th straight win in a row.

The Spurs are holding onto one of the actively longest winning streaks in the NBA this year.

The Spurs look to continue their hot streak and hopefully manage to concede their 12th consecutive home win as they host the Miami Heat tomorrow.

The Warriors, who stand No.1 in the Western Conference, took a tough loss to the Spurs in last night’s battle. They were coming off a two-game winning streak on the road, but could not finish out there third win of 4 road game to the Spurs. 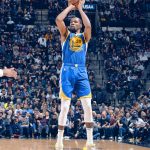 The Warriors only had three players in double digits compared to the Spurs 5. Warriors star player Stephen Curry rallied in 25 points, but only shot 9-25 from the field.

Kevin Durant ended the game with 24 points and 5 rebounds.

Klay Thompson scored only 14 points this matchup shooting 5-18 from the field. 14 points are unusual for Thompson since he has been averaging 30 points in his last four games.

The Warriors committed 20 fouls within yesterdays game which was costly for them down the stretch.

Steve Kurr Had this to say about his Spurs performance:

After their tough loss to the Spurs, the Warriors look to bounce back and continue on the road tonight facing off against Karl-Anthony Towns and the Timberwolves.