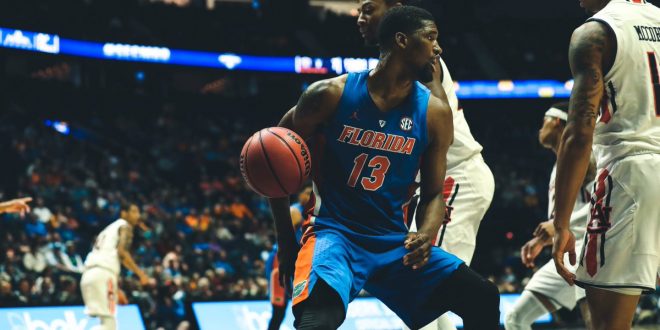 Florida Faces Nevada in First Round of NCAA Tournament

The Florida Gators are set to take on the Nevada Wolf Pack in the first round of the NCAA Tournament. The Gators, who fell to the eventual champion Auburn Tigers 65-62 in the semifinals of the SEC Tournament, secured a 10-seed in the big dance.

Can Nevada Make Another Deep Run?

The Wolf Pack, who started the season 24-1, looked primed for at least a 4-seed in the tournament. However, they struggled down the stretch by losing three of their final eight games and slipped down to a 7-seed.

Nevada is led by Caleb and Cody Martin, twin brothers out of Mocksville, North Carolina. Caleb leads the team in scoring with 19.2 points per game. He also contributes 5.1 rebounds, 2.9 assists and a team-high 1.4 steals per game.

Cody produces 11.7 points, 4.5 rebounds, 5.1 assists and 1.3 steals per game. Even though both have the exact same body frame at 6’7” and 205lbs, they play completely different roles for Eric Musselman’s squad. Caleb is a volume scorer, while Cody is an elite passer and playmaker.

Jordan Caroline is just as integral as the Martin twins. The senior is dominant in the interior, averaging 17.3 points and 9.6 rebounds per game.

Last year, Nevada made it all the way to the Sweet 16 before losing to Loyola-Chicago. It remains to be seen if this type of run can be replicated by their three senior studs.

The Gators certainly played their best basketball of the season in the SEC Tournament. They dismantled a solid Arkansas team and proceeded to take down the top-seeded LSU Tigers before losing to Auburn by three points.

Jazz Johnson discussed his thoughts on the Gators’ defense.

Offensively, the Gators struggled for the first half of the year but have found their groove over the past month. They rank 61st in offensive efficiency and have had success playing with a slow tempo.

Jalen Hudson finally has his stroke and confidence back. He has put up double digit scoring in 10 of his past 12 games.

They have six different players who average over 8.0 points per game, so their scoring attack is very balanced.

Cody Martin mentioned how versatile the Gators are offensively.

The Gators are looking to take advantage of this opportunity that didn’t seem plausible when they were 12-11 overall and 4-6 in the SEC. As chemistry has grown and players have developed, there’s only one goal left to accomplish: just keep dancing.