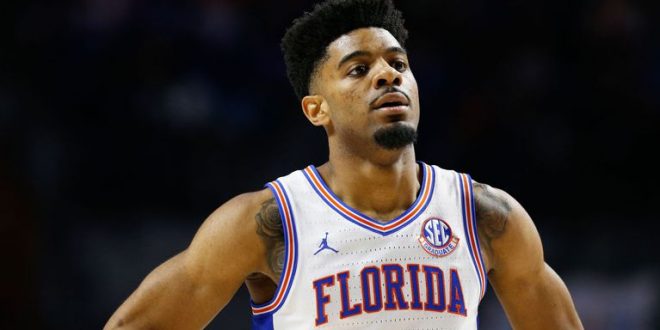 As the Gators get prepared to take on Nevada in the NCAA Tournament, there’s no one with more pressure to perform well than Jalen Hudson. While Hudson has no direct affiliation with Nevada, he does have a special relationship with two key members of the Wolf Pack.

Caleb and Cody Martin have been close friends with Hudson since they were teenagers. The trio shared the court together for four years on the same AAU team. Starting at 14 years old, they all thrived on Team Loaded. According to Hudson, “We did really well, we pretty much won every single tournament that we were in.”

While they haven’t seen each other in a while, it’s always all love between them. As soon as Hudson found out that he was going to be competing against his friends in Des Moines, Iowa, he had to let them know he was ready to battle.

“Literally, like, maybe a second after they showed that we were playing each other, I sent them the ‘eyes’ emoji, and they both responded immediately,” Hudson said. “One of them said ‘Yes sir’, the other one said ‘Let’s get it’.”

Caleb knows that they can be friends off the court, but when the jerseys go on, it’s time to compete.

The twins offered a ton of praise for Hudson.

Caleb went on to make a joke about how Hudson didn’t fit in with their AAU team at first because of his nonchalant style of play.

Their relationship extended way beyond AAU. They all decided to stay close to home at the beginning of their college careers. Hudson attended Virginia Tech, while the twins stuck together at NC State. They battled four separate times in ACC play, and both teams came out with two victories. Hudson got the most recent victory, so the twins will definitely be looking for some revenge on one of the world’s largest stages. This is certainly the rubber match between the childhood friends.

All three players were considering leaving college as juniors to enter the NBA Draft. Cody Martin pointed out that “The last time we saw him [Hudson] was going through the process of the NBA workouts.” They all decided to forgo the NBA Draft because they wanted to end their college careers on their own terms, but never expected it to play out like this.

After the conclusion of the tournament, they will all be preparing for careers in professional basketball. It’s likely that this will not be the end of their on-court relationship, whether that means competing in the NBA or G League or overseas.

It’s almost a guarantee that when the final buzzer sounds, all three will embrace each other with love, but as Cody stated, “Somebody’s gotta win.”

Previous Florida Faces Nevada in First Round of NCAA Tournament
Next Heat, Magic win three in a row to keep playoff race alive