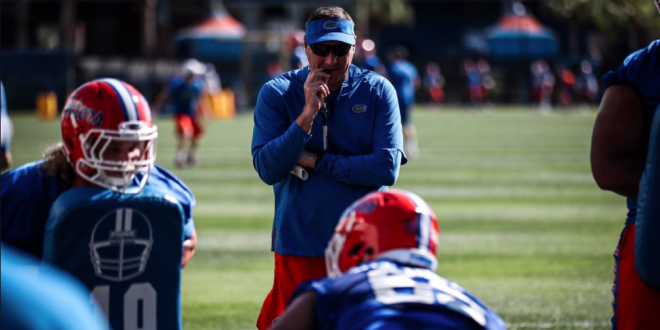 While there’s still 164 days until the first game of the college football season for Florida, spring practices are well underway.

The Gators began their training regimen on March 12. They have had practices open to the public on certain dates and will continue to do so. Practices on March 23, March 27, April 4 and April 9 will all be open to either the general public or select groups.

Then, Florida will play their traditional game in the spring: UF’s Orange and Blue Game on April 13.

Grantham’s decision to stay with Florida

For a certain period this offseason, it was uncertain whether or not Florida would be on the hunt for a new defensive coordinator. Grantham drew plenty of interest from the Cincinnati Bengals, among other teams.

When asked about Grantham, Mullen said he wasn’t surprised that NFL teams came knocking at Florida’s door for his coordinator.

Grantham will need to navigate his defense nicely throughout year 2 of his tenure at Florida. Vosean Joseph, Chauncey Gardner-Johnson and Jachai Polite will not be returning. Newcomers, or younger players, will need to replicate their sort of production if the Gators want to improve on that side of the ball.

Continuity within the coaching staff can only help the development of players as well. At this point, Mullen and his staff are simply “installing” the offense — and the rest of the playbook.

Maybe only Grantham, Mullen and a select group of people know how genuine and plausible the interest from the Bengals’ was. Regardless, Mullen will thank his lucky stars that he didn’t have to replace his defensive deputy in just year 2 in Gainesville. Florida will enter the season with David Turner as their new defensive coach after Sal Sunseri joined Alabama this winter.

Frankly, questions regarding any players’ starting job at this point are unwarranted.

Throughout his press conference, Mullen reiterated that this time of the season is used for players to learn his system.

Lingering questions about Franks’ job security are simply mundane. Following a season in which he sported a TD:INT ratio of 24:6, and now entering his junior season, this is the season that Franks can make great strides in.

Mullen is never likely to make a dramatic positional change during a period in which coaches are still tinkering with their playbooks.

Thus, he chose to explain how his entire program is based on competition at every position.

Florida’s players are scheduled for an off day today. They’ll resume practices tomorrow and on Saturday.