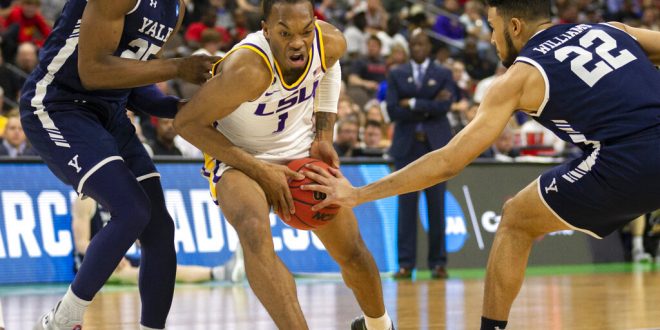 LSU Avoids Upset Against Yale, Advances to NCAA Tournament Second Round With 79-74 win

The LSU Tigers and Yale Bulldogs faced off in the first round of the NCAA Men’s Basketball Tournament on Thursday.

LSU arrived into this match up as the third seed in the East Region while Yale was the 14th seed, but this game came down to the wire. The Bulldogs tried clawing their way out of a double digit hole, but LSU hung on and secured a 79-74 win.

LSU surge in the first half

In the first three minutes, the Tigers immediately established why they are one of the best teams in the nation.

Led by big man Kavell Bigby-Williams’ four points, LSU jumped out to a 9-0 lead to open the game. Bigby-Williams even recorded a couple of blocks in this stretch.

The senior talked afterwards about his team’s use of their size on both ends of the court.

Although LSU’s offense and defense were both clicking, Yale refused to back down. Sophomore guard Azar Swain poured in a couple of three-pointers for the Bulldogs as they sliced their deficit to two points with just over 10 minutes remaining.

The Tigers regained their momentum by going on a 22-10 run in the final half of the first period. Tremont Waters chipped in nine points for LSU during this time as his team entered the half with a 45-29 lead.

Too little, too late for Yale

While trailing by 16 points seems like an insurmountable task at first, Yale slowly chipped away at their deficit.

After falling behind by 18 points, the Bulldogs received a couple of jumpers from Alex Copeland. LSU responded with a layup and maintained a double-digit lead for the first nine minutes of the second half, but Yale did not shy away from the challenge.

Led by a triple from Copeland and five points from Paul Atkinson, the team shaved LSU’s lead to seven points.

Even though they were starting to establish a rhythm, the Tigers responded to every single bucket by Yale. The two teams went back and forth for a majority of the rest of the second half as Yale couldn’t significantly reduce their deficit. The game seemed to be all but over when Javonte Smart extended LSU’s advantage to eight points with 51 seconds left.

In typical March Madness fashion, however, the Bulldogs weren’t going to give up on an opportunity to advance in the dance. LSU’s Naz Reid drilled two free throws after a Copeland three-pointer, but Yale’s Jordan Bruner responded with a triple of his own.

After the Tigers’ lead became just four points, the team knocked down five of their six remaining free throw attempts. Both Copeland and Bruner connected on shots from behind the arc, but there wasn’t enough time to complete the comeback.

Junior guard Skyler Mays had high praise for what his teammates were able to accomplish on Thursday. Mays was impressed with his team’s work on the inside as they scored 40 points in the paint against the Bulldogs:

Up next for the Tigers

LSU avoided an upset in the Round of 64, and will take on the Maryland Terrapins this weekend in the second round. Tipoff for that game is scheduled for 12:10 p.m. on Saturday.

The two schools have gone head-to-head just four times in their histories. The Tigers are 2-2 against the Terps all-time, with the last meeting coming in 1989.